Amid a contentious 2016 primary season, a majority of Republican voters currently express uncertainty about whether the Republican Party would solidly unite behind Donald Trump if he were to become the party’s general election candidate. At the same time, roughly half of Ted Cruz’s and John Kasich’s supporters say that Trump would make a “poor” or “terrible” president. 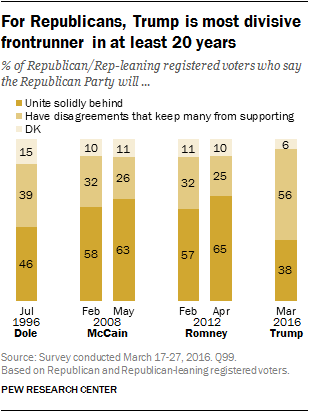 A majority (56%) of Republican registered voters say that disagreements within the GOP will keep many from supporting Trump as the party’s nominee, while just 38% say the party will solidly unite behind him, according to a new Pew Research Center report. This is the most skeptical either party’s electorate has been of their party’s ability to unite behind a frontrunner in at least 20 years.

The Republican race stands in contrast to that of the Democrats in this regard. The survey finds little evidence of similar unease among Democratic voters about their party’s ability to unite behind Hillary Clinton if she were to become the nominee, with 64% saying the party will do so. This is on par with the shares of Democratic voters saying the party would ultimately unite behind either Barack Obama or Clinton herself in March of 2008. 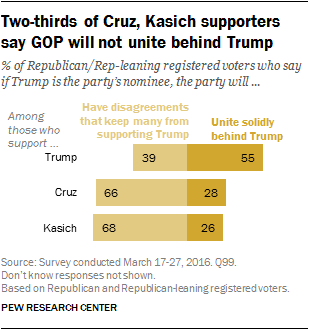 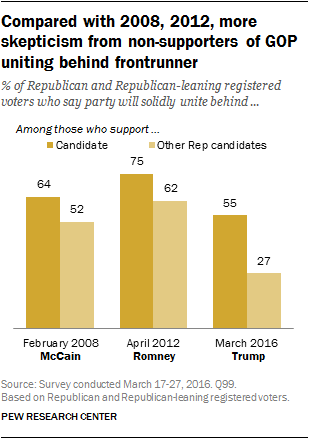 Most Republicans who are supporting Ted Cruz (66%) and John Kasich (68%) say disagreements within the GOP would keep many Republicans from uniting behind Trump if he were to become the nominee, while roughly a quarter of each say the party would unite behind Trump. 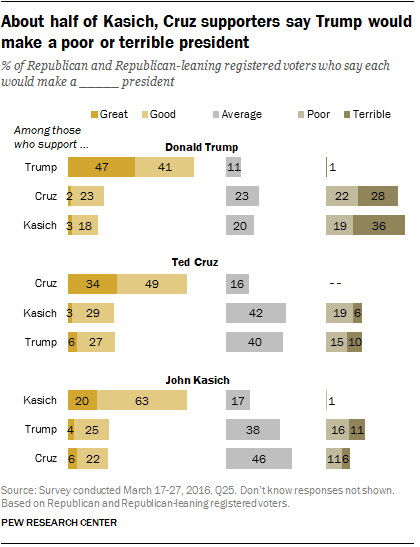 Supporters of Kasich and Cruz are not only uncertain of Trump’s ability to unite the Republican Party, but they also offer a particularly negative assessment of Trump’s potential as a president.

Fully half of Cruz supporters say they believe Donald Trump would make a poor (22%) or terrible (28%) president if he were to be elected. Kasich supporters are similarly negative in their views of Trump as president: 55% say he would be either poor or terrible in the Oval Office.

But there is less criticism of Cruz and Kasich among the other’s supporters than there is of Trump. Only 25% of Kasich supporters say Cruz would be a poor or terrible president, while just 17% of Cruz supporters say this about Kasich.