Florida has long been a battleground state in presidential elections, with Hispanic voters playing a growing role in determining the outcome of the state’s presidential vote. Hispanic voters this year make up an even larger share of the state’s registered voters than in past years, but the profile of the Latino electorate has shifted over the past decade or so, according to a Pew Research Center analysis of state voter registration data.

Due to the state’s large Cuban voting bloc, the Latino vote had been reliably Republican. For example, President George W. Bush won both the Hispanic vote and the state in 2004. But 2008 represented a tipping point: More Latinos were registered as Democrats than Republicans, and the gap has only widened since then. This has led to the growing influence of Democrats among the state’s Hispanic voters in 2008 and 2012, two presidential elections in which Barack Obama carried both Hispanics and the state. At the same time, the number of Latino registered voters in Florida who indicate no party affiliation has also grown rapidly during this time, and by 2012 had surpassed Republican registrations.

In 2014, 4.8 million Hispanics lived in Florida, making it the third-largest Hispanic population in the nation, behind California and Texas. It is also growing faster than Florida’s population. Today 24% of Floridians are Hispanic, up from 17% in 2000. Overall, 1.8 million Hispanics were registered to vote in Florida as of February 2016, according to the state’s Division of Elections. 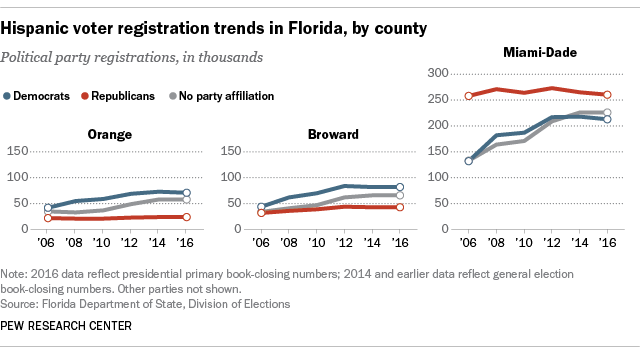 In Florida’s two other counties with large Latino populations – Broward (north of Miami) and Orange (Orlando) – Latino registered voters have leaned more Democratic than the state, but the trend toward more registering as Democrats or professing no party identification applies there as well.

What’s behind these changes? On the one hand, the demographics of the state’s Hispanic population are growing more diverse. In 2014, Cubans made up a smaller share (31%) of Hispanic eligible voters – adult U.S. citizens – in Florida than they did in 1990 (46%). Meanwhile, over the same period, Puerto Ricans made up a larger share of the state’s Hispanic eligible voters, rising from 25% to 27%. These changes have been driven by the outmigration of Puerto Ricans from the island to central Florida and the movement of Puerto Rican-origin Hispanics in the northeast U.S. to central Florida. The share of Hispanic eligible voters of other ancestry (such as Mexico and South America) has also increased, from 29% then to 42% today.

On the other, Cuban Americans and their politics are also changing. This group increasingly leans toward the Democratic Party as more are born in the U.S. In addition, due to an influx of Cuban immigrants since 1990, a sizable majority of Cuban Americans today say they have at least some common values with people living in Cuba.

Note: This post was originally published on July 31, 2015, and has been updated.