This weekend, Boston Globe editorial employees received an unusual request: Could anyone run a paper route? Due to problems with the paper’s new distributor, some home subscribers had not received their print editions. About 200 Globe workers responded to the call, and hand-delivered copies to local residents.

Although the paper announced Tuesday that it was returning to its old distributor for help with home deliveries, the Globe situation is a reminder that even in the digital era, many local news consumers still rely on the print product for their news. 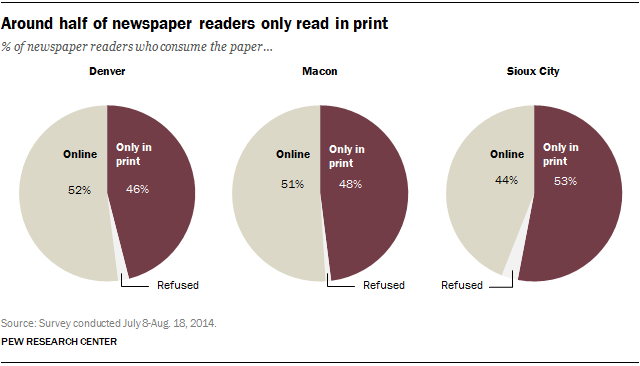 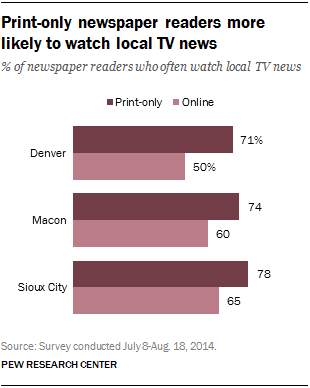 Data from Pew Research Center and other sources show that around half of newspaper readers consume newspapers only in their printed form. In our study of the local news environments in three markedly different U.S. metropolitan areas, nearly or about half of readers of the local daily paper in Denver (46%), Macon, Ga. (48%), and Sioux City, Iowa (53%) did not access the paper online.

These findings are similar to the 56% of newspaper readers in a national survey who said their only contact with a newspaper was in print. The print edition also remains an important part of newspapers’ business model: More than three-quarters of their advertising revenue comes from print.

Indeed, print newspaper readers tend to be news enthusiasts. They are more likely to often watch local TV news than those newspaper readers who access the paper online instead of or in addition to the print edition. And although print-only readers in the three cities studied are certainly older than their counterparts who access the paper online – in their mid-50s, compared with online newspaper readers, who were generally in their early to mid-40s – this difference persists even when controlling for age. If print distribution becomes economically unfeasible, it remains to be seen whether this group will finally move to the online edition, or be content with getting their local news from TV, as they already do.

Even in the digital age, home distribution remains a key link between newspapers and their readers. And should the print product become a thing of the past, evidence from these three cities suggests that the impact would be felt disproportionately by about half of their audience – indeed, a particularly vulnerable contingent at that.