Americans in middle-income households have lost significant ground since 1970, according to a new Pew Research Center analysis of government data.

The middle class has long been the country’s economic majority, but our new analysis finds that’s no longer true. Meanwhile, the middle class has fallen further behind upper-income households financially, which now hold a larger share of aggregate household income than ever before in the 44-year period examined.

This is the culmination of a long slide in which the share of adults in middle-income households has fallen from 61% in 1971 to 50% in 2015.

2The decline in the middle represents both economic progress and polarization. The shift shows progress in the sense that a larger share of Americans now live in upper-income households. Fully 21% of American adults in 2015 were upper income, compared with 14% in 1971, a 7-percentage-point increase. The increase in the share of upper-income adults was greater than the change in the opposite direction. Some 29% of U.S. adults were low income in 2015, compared with 25% in 1971.

But the data also show increasing economic polarization: As the distribution of adults thins in the middle, it is bulking up most at the extreme ends of the income distribution, the lowest and highest tiers. 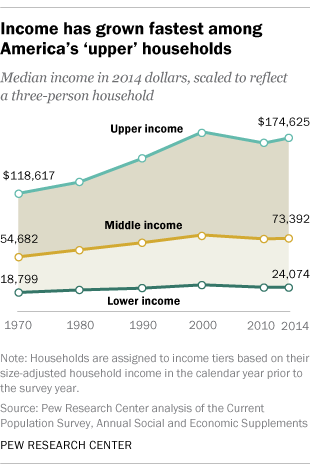 5Over the years, certain demographic groups have fared better than others in moving up the economic ladder. Since 1971, older Americans (ages 65 and older) and African Americans have made notable progress in moving up the income tiers. But overall, both groups are still overrepresented in the lower-income tier. Married adults also made significant progress over this 44-year period, and women overall made greater economic gains than men.

Americans without a college degree stand out as experiencing a substantial loss in economic status since 1971, as do young adults ages 18 to 29. Hispanics overall are also more likely to be in lower-income households than in 1971, a change driven by the increasing share of immigrants in the Hispanic population in the past four decades.