On one level, the story of how Americans’ religious affiliations are changing is well known and straightforward: More and more U.S. adults say they do not identify with any religion, while a shrinking majority describe themselves as Christians,  according to  the Pew Research Center’s 2014 Religious Landscape Study we published in May.

But whether the country is actually becoming less religious is a more complicated question. Are its religious beliefs and practices changing beyond the declining shares of people who choose to identify with a religion?

Our second report from the 2014 Religious Landscape Study examines Americans’ religious beliefs and finds that the question of whether adults in the U.S. are becoming more or less religious depends, in part, on how religious observance is measured.

1Overall, Americans have become slightly less religious – based on some key traditional gauges of religiosity – since the last Religious Landscape Study was conducted in 2007. For instance, 53% of U.S. adults now say religion is very important in their lives, down from 56% in 2007. Over the same seven-year period, the share of Americans who say they are absolutely certain that God exists has dropped from 71% to 63%. And 36% of adults report attending religious services at least weekly, down 3 percentage points since 2007.

2This overall drop in religiosity has been driven by the rapid growth of the religiously unaffiliated population (from 16% of all U.S. adults in 2007 to 23% in 2014) – along with the fact that these religious “nones” are becoming even more secular over time. For example, while 70% of “nones” expressed a belief in God in 2007, that figure has fallen to 61% today. At the same time, among the shrinking share of Americans who do identify with a religion, levels of religious observance have been relatively stable. Indeed, by some measures, such as frequency of sharing their faith with others and reading scripture, religious engagement has even ticked up modestly among the affiliated.

3As is the case with religious affiliation, generational replacement also is helping to drive lower levels of religious commitment. In other words, as older, more religiously observant generations die out, they are being replaced by far less religious young adults. One example: Two-thirds of members of the Silent generation (67%) say religion is very important in their lives, but only 38% of the youngest members of the Millennial generation – those born between 1990 and 1996 – say the same. Just 28% of these youngest Millennials report attending religious services at least weekly, compared with about half (51%) of their Silent generation counterparts. 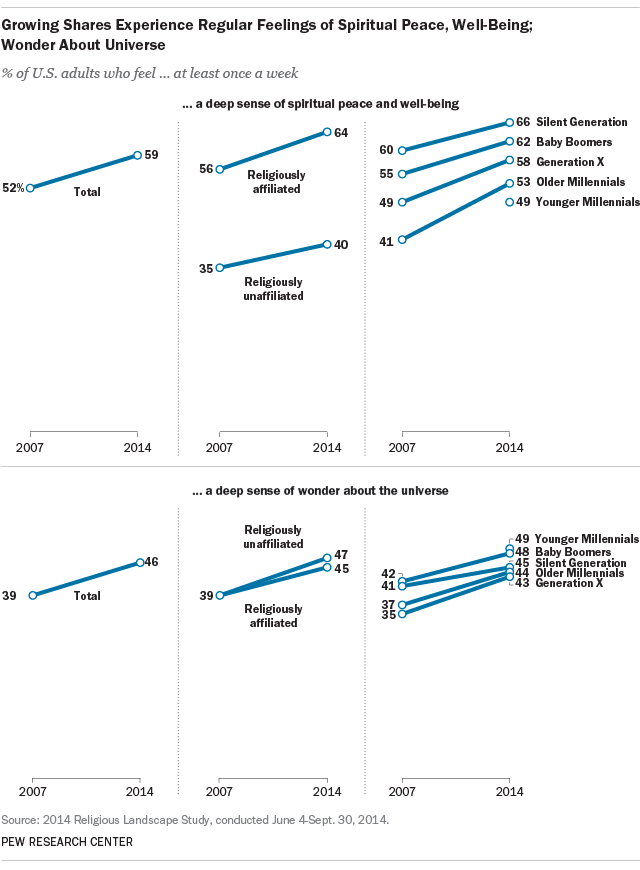 4While traditional measures of religiosity are down, some measures of spirituality are up. Roughly six-in-ten Americans (59%) say they feel a deep sense of spiritual peace and well-being at least once a week, up from 52% in 2007. And nearly half (46%) report often feeling a deep sense of wonder about the universe, also a 7-point jump over seven years. Even religious “nones” have become more likely to have these experiences in recent years.

5Overwhelming majorities of Americans see churches and other religious organizations as having a positive impact on society, but many also express criticisms of these same religious institutions. Nearly nine-in-ten U.S. adults say religious institutions bring people together and strengthen community bonds (89%).  In addition, 87% say these organizations play an important role in helping the poor and needy. Three-quarters say they protect and strengthen morality in society (75%). However, roughly half of Americans say religious institutions are too concerned with money and power (52%), focus too much on rules (51%) and are too involved with politics (48%).