Republicans differ sharply from Democrats in their views on the state of the economy, the tax system, government aid to the poor and other issues. But Republicans also have divisions within their own ranks.

Here is a profile of Republicans’ views of the economy and economic policy, based on our surveys: 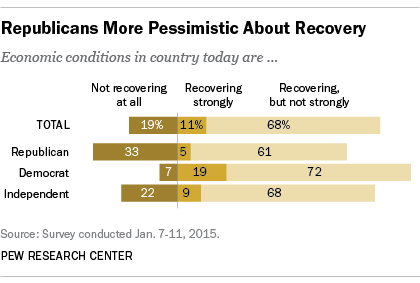 When asked in July, Americans rated the parties about equally when it came to which would better handle the economy.

The federal budget deficit remains a top issue for Republicans. About eight-in-ten Republicans (78%) said in September that the budget would be “very important” to their vote in 2016, compared with 58% of Democrats.

But many Republicans express discontent with their own party on the issue of spending. Nearly six-in-ten Republicans said in our May survey that the GOP was not doing a good job representing their views on government spending. As was the case with the economy in general, the public rated the parties about equally when it came to who would do a better job dealing with the deficit.

Republicans are much more likely than Democrats to say that they want to completely overhaul the U.S. tax system. Two-thirds (66%) of Republicans said in a February survey that the tax system should be completely changed, compared with 48% of Democrats. Among top complaints voiced by Republicans were that some corporations don’t pay their fair share (52%) and that some of the wealthy don’t, either (45%) – numbers substantially lower than among Democrats sharing those criticisms. About half of Republicans (53%) also said they are bothered “a lot” by the complexity of the tax system. 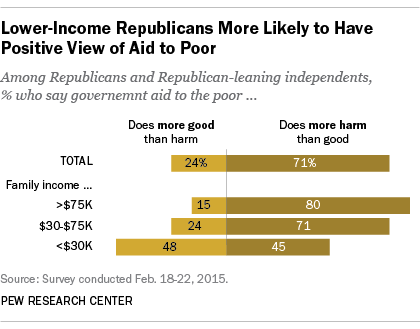 Government aid to the poor