Many American Catholics are abuzz about Pope Francis’ first visit to the United States as pontiff. Francis’ trip later this month includes a meeting with President Obama and an address to a joint session of Congress in Washington before he goes on to New York (and the United Nations) and, finally, to Philadelphia for the 2015 World Meeting of Families.

The trip is part of a busy fall for the pope. The Catholic Church also will convene a synod on family issues at the Vatican in October; the synod will examine the role in the church of divorced and remarried Catholics as well as gays and lesbians. Ahead of these events, the Pew Research Center asked American Catholics for their views about family structures, religious beliefs and practices and other topics.

Here are several key findings from the new survey:

1Most American Catholics are comfortable with family arrangements that have been traditionally frowned upon by the church. For example, most U.S. Catholics say it is at least “acceptable” – and many say it is just “as good as” any other arrangement – for children to be raised by unmarried parents, gay or lesbian parents, single parents or divorced parents. Majorities also are accepting of a husband and wife who choose not to have children, a man and woman living together romantically without being married, and a same-sex couple living together. 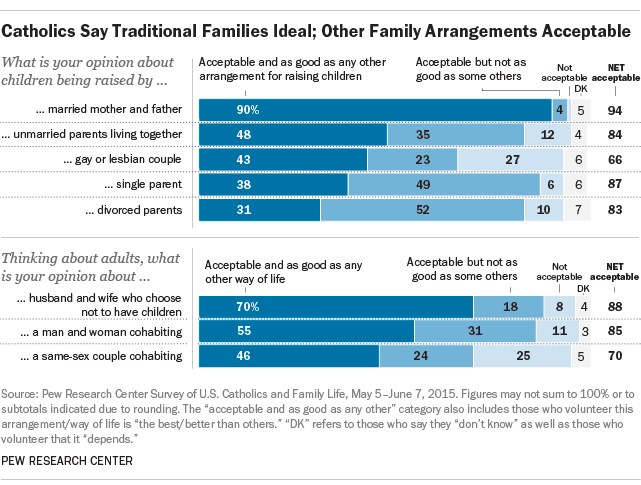 2The survey finds that the share of Americans with some connection to Catholicism approaches half of the country’s adults – 45%. This includes 20% who identify their religion as Catholic. Another 9% are categorized by the survey as “cultural Catholics” – those whose primary religious identity is not Catholic (most are Protestants or religious “nones”), but who say they consider themselves Catholic or partially Catholic in some way. An additional 9% are ex-Catholics – those who were raised Catholic but now eschew any Catholic identity. And 8% have other connections to Catholicism, such as having a Catholic spouse.

4Even among those who identify as Catholic, many disagree with church teaching about what constitutes a sin in some family-related areas. Roughly half or more of U.S. Catholics say that using contraceptives, living with a romantic partner outside of marriage and remarrying after a divorce without an annulment are not sins. And about four-in-ten (39%) say homosexual behavior is not a sin. 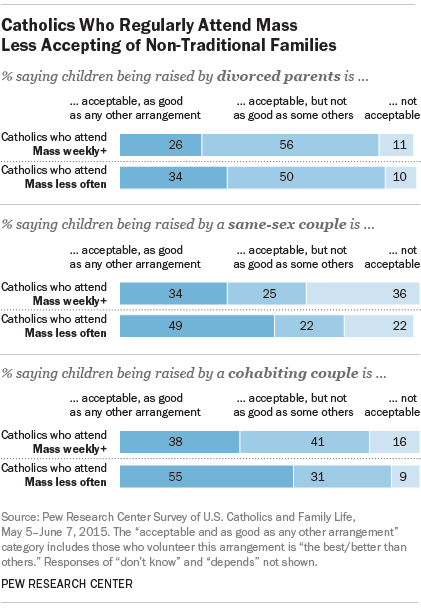 Catholics who attend Mass at least weekly are more likely than other Catholics to have opinions that align with church policies and teachings. But even among frequent churchgoers, majorities are open to non-traditional family arrangements. For example, roughly a third of Catholics who attend Mass weekly (34%) say children being raised by a same-sex couple is acceptable and as good as any other arrangement, which is similar to the share who see this as unacceptable (36%). 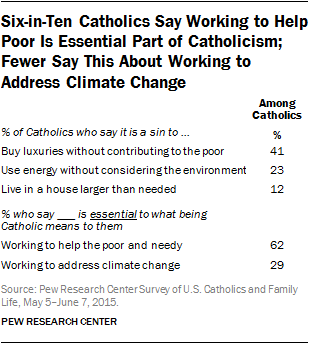 On another topic Pope Francis has brought to the fore – poverty and its relationship with climate change – most U.S. Catholics (62%) say working to help the poor and needy is essential to what being Catholic means to them. But fewer (41%) say it is a sin to buy luxury goods without contributing to the poor. And fewer still express concerns about environmental issues in a religious context: 29% say working to address climate change (as urged by Pope Francis in an encyclical released shortly after the survey was conducted) is an essential part of their Catholic identity, and 23% say it is a sin to use energy without considering the environment.