Updated data on the legislative productivity of the 114th Congress is available here. 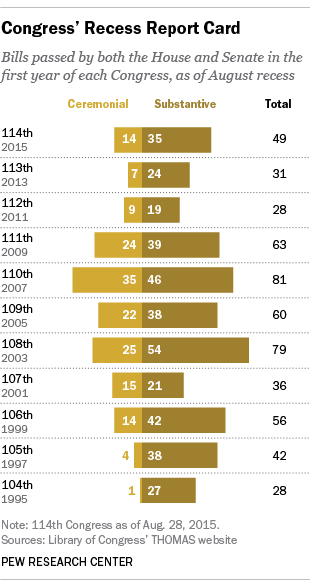 With the House and Senate on their August recess until after Labor Day, it seems like a good time to check on how the 114th Congress stacks up against its predecessors when it comes to legislative productivity – both in total laws passed and in the share of them that make substantive changes in the law.

As it turns out, there are early hints that congressional productivity may be on an upswing, after two successive Congresses that enacted the fewest- and second-fewest laws in at least four decades. According to the Library of Congress’ THOMAS database, Congress passed 49 measures before its summer break (though some of them weren’t formally signed into law by President Obama until afterward). We categorize 35 of those acts as “substantive” by our deliberately generous criteria – that is, any legislation other than renaming buildings, giving out medals, commemorating historic events and other purely ceremonial acts.

By contrast, the 112th Congress had passed just 28 pieces of legislation – 19 of them substantive – by the time its August 2011 recess rolled around, matching the level of the 104th Congress in 1995. The 113th Congress was slightly more productive, passing 31 laws (24 of them substantive) by its first August recess, which is formally known as a district (or state) work period.

Lawmakers don’t always get off to such a slow start. In 2007, Congress had passed 81 laws (though 35 of them were ceremonial); four years earlier, 79 laws had been passed by the time Congress went on its August break. But early-session activity doesn’t always indicate how productive a Congress will be over its entire two-year term: The 106th Congress, which passed 580 laws during its 1999-2000 term, had passed just 56 by its August 1999 recess.

So what did the current Congress accomplish in its first seven months? Among other things, it scaled back the government’s ability to access Americans’ phone records; extended Obama’s authority to “fast track” trade agreements, including the pending Trans-Pacific Partnership; passed a temporary extension for the federal highway program; and revised the formula that determines how Medicare pays doctors.

Among the unfinished business for when Congress returns: cybersecurity legislation, a debate on the nuclear weapons deal with Iran, a stopgap spending bill by Oct. 1 to avoid another government shutdown, an overall spending plan (and debt-limit increase) for the coming fiscal year, and a permanent fix for the highway trust fund.

Note: This post has been updated since its original publication on Aug. 7, 2015.