For many Americans, the term “mixed race” brings to mind a biracial experience of having one parent black and another white, or perhaps one white and the other Asian.

But for many U.S. Latinos, mixed-race identity takes on a different meaning – one that is tied to Latin America’s colonial history and commonly includes having a white and indigenous, or “mestizo,” background somewhere in their ancestry.

When asked if they identify as “mestizo,” “mulatto” or some other mixed-race combination, one-third of U.S. Hispanics say they do, according to a 2014 Pew Research Center survey of Hispanic adults.

The term mestizo means mixed in Spanish, and is generally used throughout Latin America to describe people of mixed ancestry with a white European and an indigenous background. Similarly, the term “mulatto” – mulato in Spanish – commonly refers to a mixed-race ancestry that includes white European and black African roots.

Across Latin America, these are the two terms most commonly used to describe people of mixed-race background. For example, mestizos represent a racial majority in Mexico, most of Central America and the Andean countries of South America.

Concepts of multiracial identity have been present in Latin America since colonial times. The Spanish caste system outlined all the different ways the native peoples in New Spain had mixed with Africans and Europeans – and the names and rights associated with each combination. In the early to mid-20th century, a number of countries in Latin America adopted the concept of “mestizaje,” or mixing and blending, and declared their populations mestizo in an effort to eliminate racial conflict and promote national identity.

According to the Pew Research survey of U.S. Hispanics, those who identify as mixed race, mestizo or mulatto are more likely to be U.S. born than those who do not (44% vs. 37%). They are also more likely than Latino adults who do not identify as mixed race to be non-Mexican (45% vs. 36%) and to have a higher educational attainment (45% have some college or more, versus 27%). 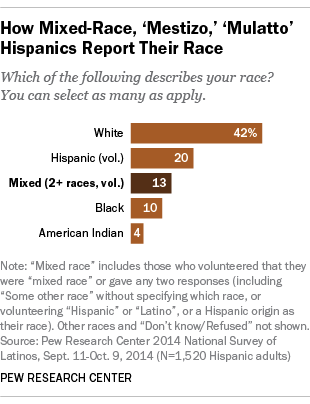 The use of these labels to describe mixed-race ancestry is an example of how racial identity among Hispanics often defies conventional classifications used in the U.S. For example, among Hispanic adults we surveyed who say they consider themselves mixed race, mestizo or mulatto, only 13% explicitly select two or more races or volunteer that they are “mixed race” when asked about their racial background in a standard race question (like those asked on U.S. census forms). Instead, about four-in-ten of Hispanic respondents identifying as mestizo/mulatto say their race is white, while one-in-five volunteered their race as Hispanic.

These findings reflect the challenges the U.S. Census Bureau faces when measuring Hispanic racial identity. When asked about their race in census forms, a significant number of Hispanics do not choose a standard census race category such as white, black or Asian. Instead, about four-in-ten select the “some other race” category. This is coupled with the fact that two-thirds of U.S. Hispanic adults consider being Hispanic as part of their racial background, not just an ethnicity.