However, it could be a half-century (or longer) before Hispanics become a full majority in California, if that demographic milestone is reached at all, according to scaled-back state population projections published by the state Finance Department.

Under projections published in 2007, the state’s Hispanic population was expected to reach 31 million in 2050, or 52.1% of all Californians. But according to updated projections released late last year, Hispanics are now expected to number 23.7 million in 2050, or 47.6% of all Californians. That pushes the prospect of a Hispanic demographic majority further into the future – perhaps to sometime after 2060.

The 2014 population projections also included an estimate for 2060 that indicates that Hispanics may not reach a majority by that year, when they are expected to number 25.5 million, or 49.3% of California’s population.

This change in the projected growth of the Hispanic population is driven by a number of factors. California has long been a top destination for immigrants from Latin America, but immigration from Latin America to the U.S. began to slow in 2008 due in part to the Great Recession. As a result, national Hispanic population growth today is driven more by U.S. births than by the arrival of new immigrants. At the same time, birth rates are falling among Hispanic women. 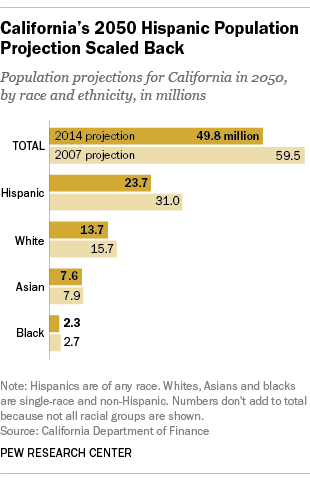