Immigrants to the U.S. are increasingly identifying themselves as religiously unaffiliated, that is, atheist, agnostic or having “no religion in particular,” according to a new Pew Research Center study of America’s religious composition. Indeed, recent immigrants (those who have arrived since 2000) are as likely to have no religious affiliation as the country’s overall adult population.

The new survey also found that the share of Christian immigrants has slipped somewhat in the same period, moving from 75% to 68%. That too is in line with trends in the general population, where the share that is Christian has declined.

There also has been growth in the percentage of immigrants who are adherents of non-Christian faiths, rising from 8% to 12% in the past seven years, the new study found. Some groups have seen significant increases. For instance, Muslims now account for 4% of foreign-born residents in this country, up from 2% in 2007.

Roughly one-in-seven (15%) of the more than 35,000 participants in the new survey were born outside the U.S. 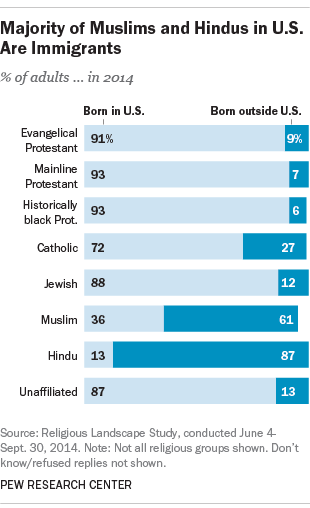 Finally, the survey found that a number of religious groups are largely comprised of immigrants: The vast majority (87%) of Hindu adults living in the U.S. are first-generation immigrants, while about six-in-ten American Muslims (61%) in the survey were born overseas. Among Christian traditions, Orthodox Christians have the greatest share of members born abroad (40%), a significantly higher percentage than the 27% of Catholics who are first-generation immigrants.

Interviews for the 2014 study were only conducted in English and Spanish. This may affect results, since immigrants who speak only other languages, such as Arabic and Mandarin, could not be interviewed.