Since the dawn of the internet, there’s been much talk about the digital divide – the gap between those with access to the internet and those without. But what about the “homework gap”?

In recent years, policymakers and advocates have pushed to make it easier for low-income households with school-age children to have broadband, arguing that low-income students are at a disadvantage without online access in order to do school work these days. Later this year, the Federal Communications Commission is expected to begin a rule-making process to overhaul the Lifeline Program, an initiative that subsidizes telephone subscriptions for low-income households, so that it would also cover broadband.

In 2013, the Lifeline program provided $1.8 billion worth of telephone subsidies for qualified low-income people. The FCC has not yet provided estimates of how much it would cost to add broadband subsidies to the program, but the debate will undoubtedly focus on overall program costs and how many households would be covered. 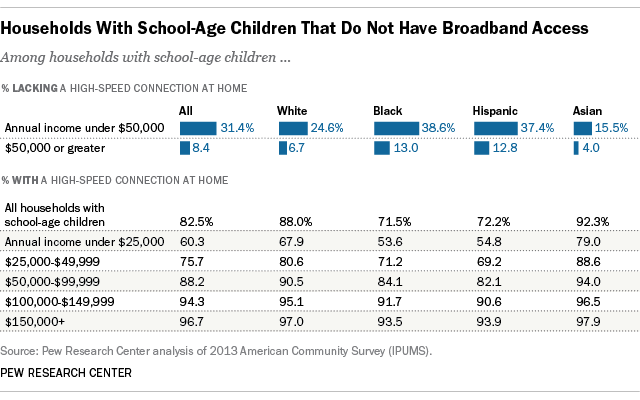 How big is the homework gap? A new Pew Research Center analysis finds most American homes with school-age children do have broadband access – about 82.5% (about 9 percentage points higher than average for all households). With approximately 29 million households in America having children between the ages of 6 and 17, according to Pew Research Center analysis of U.S. Census Bureau’s American Community Survey data, this means that some 5 million households with school-age children do not have high-speed internet service at home. Low-income households – and especially black and Hispanic ones – make up a disproportionate share of that 5 million.

Pew Research analysis of the Census data finds that the lowest-income households have the lowest home broadband subscription rates. Roughly one-third (31.4%) of households whose incomes fall below $50,000 and with children ages 6 to 17 do not have a high-speed internet connection at home. This low-income group makes up about 40% of all families with school-age children in the United States, according to the bureau’s American Community Survey. (The survey asked questions on home internet use for the first time in 2013.)

By comparison, only 8.4% of households with annual incomes over $50,000 lack a broadband internet connection at home. In other words, low-income homes with children are four times more likely to be without broadband than their middle or upper-income counterparts.

Asian Americans, by contrast, outperform the other groups in broadband adoption for households with children, regardless of income level. A likely explanation is that Asian Americans have the highest educational levels of any racial group in the United States, which is a characteristic strongly associated with having broadband at home.

Note: The author is currently a senior researcher at Pew Research Center. Prior to joining the center, he served on the Federal Communications Commission team that developed the National Broadband Plan.