Crime consistently ranks as one of the most followed and discussed topics by the public, and it receives more attention in local news media than almost any other subject. A recent Pew Research Center report reinforces these findings but also suggests that certain groups of residents pay closer attention to local crime than others in the three cities studied. A difference that particularly stands out is between racial and ethnic groups.

A deep analysis of local news in Denver, Macon, Ga., and Sioux City, Iowa, finds that in each city at least three-in-ten people follow crime very closely and more than half of residents often discuss crime with others. 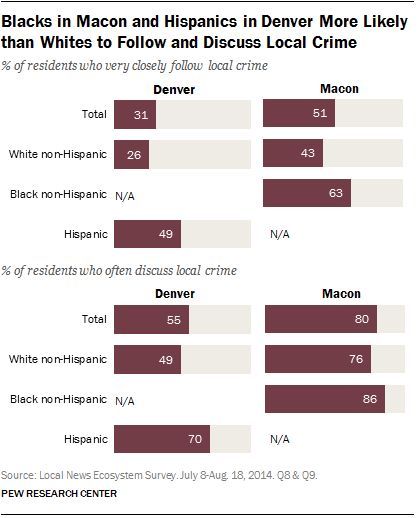 Interest in crime, though, is not equal across all residents in these cities, as seen in Denver and Macon, where racial and ethnic subgroups were large enough to analyze.

In Denver, Hispanics (19% of the city’s population) follow crime news very closely at nearly twice the rate of whites, 49% versus 26%. And seven-in-ten Hispanics in Denver often discuss crime news, compared with 49% of whites.

In Macon, blacks (41% of the city’s residents) differ from whites in the amount of attention they devote to crime news to nearly the same degree. About six-in-ten blacks very closely follow crime news, compared with less than half (43%) of whites. And, while a vast majority of both blacks and whites discuss crime, blacks do so at higher rates (86% vs. 76%).

Differences in attention to crime news also emerge across education and income lines, with the less wealthy and less educated being more likely to follow and discuss crime news. These findings show that race and ethnicity, income, and education are all prominent factors in who discusses and follows crime news. (It is important to note that these three demographic variables are related to each other: Blacks in Macon and Hispanics in Denver report lower levels of income and education.)

Differences between women and men are less pronounced. Both tend to follow crime at roughly the same rates, but in Denver and Sioux City, women are more likely to discuss the topic with others. Nearly two-thirds (64%) of women in Denver say they often discuss crime, compared with less than half of men (45%). And in Sioux City the gap is 74% to 64%. In Macon, however, which has the greatest attention to the topic overall, both men and women discuss crime at about the same rate.

There is little difference among other factors, such as age and level of civic engagement.