Scientific innovation and discovery touches all aspects of American life, from medical care to the food we eat and the technologies we rely on in our daily activities.

A report released Thursday by the Pew Research Center allows us to compare views on a range of specific topics between the American public and U.S. scientists connected with the American Association for the Advancement of Science (AAAS). The study marks the center’s new initiative to study the intersection of public opinion, science and all aspects of society.

1There are large differences between the public and scientists on a wide range of science-related topics, but the largest one is genetically modified foods. 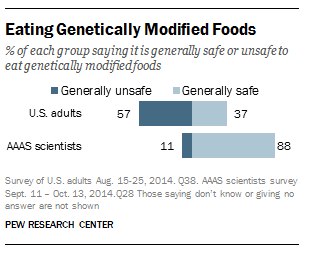 Pew Research asked both a representative sample of the public and AAAS scientists about a range of science-related topics, from climate change to childhood vaccinations. 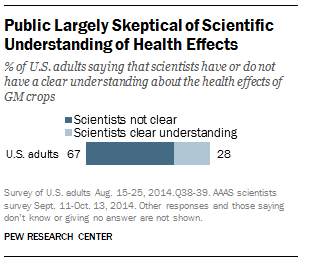 One possible reason for the gap: Two-thirds of the public (67%) say scientists do not have a clear understanding about the health effects of GM crops.

We also saw sizable differences between the two groups in their views about the use of animals in research; whether vaccines for childhood diseases such as measles, mumps and rubella should be required; and which energy technologies to use. The only one of the 13 issues compared where differences between the public and scientists are particularly modest is the International Space Station. Fully 64% of the public and 68% of AAAS scientists say that the space station has been a good investment for the country.

2Both the public and scientists see the U.S. behind other nations on K-12 STEM education. 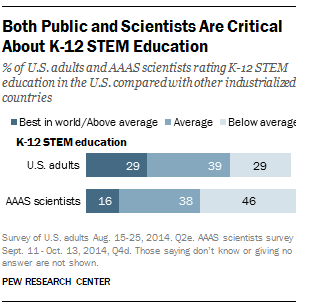 While both scientists and the public tend to see U.S. scientific achievements as high among other industrial countries, both groups are markedly more critical of the quality of American science, technology, engineering and math (STEM) education in grades K-12. Only 16% of AAAS scientists and 29% of the general public rank U.S. STEM education for grades K-12 as above average or the best in the world. Fully 46% of scientists and 29% of the public rank K-12 STEM as below average.

Scientists’ overall assessments of the sciences, while still mostly positive, are less upbeat than they were in 2009, the last time that Pew Research conducted a survey of AAAS members. About half of AAAS scientists (52%) say this is generally a good time for science as a whole, down 24 percentage points from 76% in 2009. Similarly, the share of scientists who say this is generally a good time for their scientific specialty is down from 73% in 2009 to 62% today. The drop in positive assessments of the state of science since 2009 occurred among scientists of all disciplines, those with a basic and applied research focus, as well as those working in academia and those working in industry.

5Views about science topics only sometimes divide along political lines. 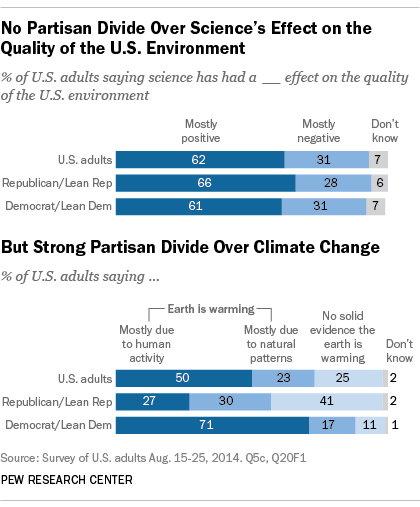 But there are stark differences between political groups when it comes to whether climate change is occurring and the primary factors driving climate change. Asked to choose which of three alternatives describes their views about the earth’s temperature, 71% of Democrats and independents who lean Democratic say the earth is warming primarily due to human activity, such as burning fossil fuels. By contrast, just 27% of Republicans and leaning Republicans hold this view; 30% of this group says climate change is mostly due to natural patterns in the earth’s environment and 41% say there is no solid evidence the earth is warming.

Key findings about Americans’ confidence in science and their views on scientists' role in society
5 key findings about public trust in scientists in the U.S.
Most Americans get their science news from general outlets, but many doubt their accuracy
Most Americans say science has brought benefits to society and expect more to come
Divides over food science tied to personal concerns about eating, health
Defining generations: Where Millennials end and Generation Z begins
Quiz: Are you a Core Conservative? A Solid Liberal? Or somewhere in between?
Key findings about U.S. immigrants
About One-in-Four U.S. Hispanics Have Heard of Latinx, but Just 3% Use It
Views on Race in America