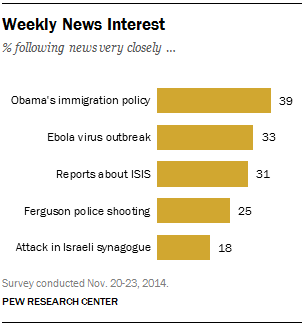 Amid anticipation over a grand jury ruling in the police shooting of an unarmed black teenager in Ferguson, Mo., 25% say they are following developments in the shooting death of Michael Brown very closely. That is on par with interest in the weeks following Brown’s death in August. 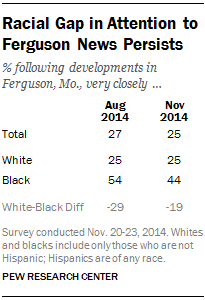 News interest in Obama’s new immigration policy is nearly as high among whites (37% following very closely) as among Hispanics (45%) and blacks (44%). There are wider racial differences in interest in other stories, notably Ferguson and Ebola. About four-in-ten blacks (44%) tracked developments in the Michael Brown case very closely compared with 25% of whites. And blacks are much more likely than whites to say they tracked news about Ebola very closely (52% vs. 29%). 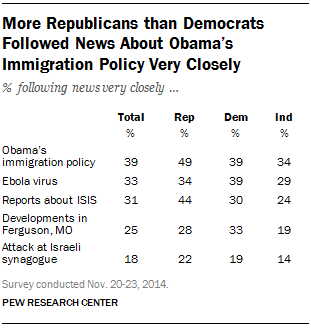 How Obama’s executive action will impact immigrants, by birth country