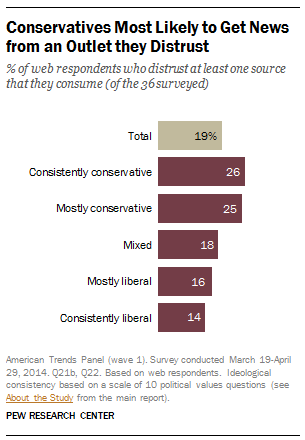 By and large, Americans trust the news they hear from the most well-known organizations.

But a new Pew Research Center report on political polarization and media habits finds that a significant number of web-using adults get at least some of their news about government and politics from sources that they distrust – a concept that may seem puzzling.

Nearly two-in-ten (19%) respondents from our survey said they get news from a source (be it a cable news network, a news magazine or a news website) that they distrust. This figure, though, is more pronounced among conservatives. About a quarter of both those with consistently conservative (26%) and mostly conservative (25%) political views consume at least one source that they distrust, compared with just 14% of those with consistently liberal political views and 16% of those with mostly liberal views. Still, most respondents (78%) get news only from outlets they trust or ones they neither trust nor distrust. (Ideological consistency in this analysis is based on responses to 10 questions about a range of political values.) 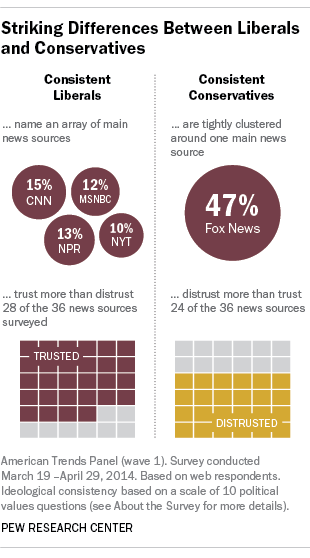 To be sure, the most common top sources on both the right and the left also tend to be the most trusted sources. The report finds that almost half (47%) of respondents with consistently conservative political views name Fox News as their main news source, a news organization they also overwhelmingly trust. Respondents with consistently liberal political views are less unified in their use of a single news source, with no more than 15% citing CNN, NPR, MSNBC and the New York Times as their main go-to — and all four outlets are widely trusted among consistent liberals.

Some of the news organizations that consistent conservatives distrust, yet still get their news from, are the major broadcast television networks. Among consistent conservatives, 14% distrust but also consume at least one of these networks – ABC News (10%), CBS News (7%) and/or NBC News (7%). This compares with only 2% of those with consistently liberal political values.

Finally, there are a fair amount of respondents who get news from sources that they do not particularly feel strongly about one way or the other. Nearly four-in-ten (39%) respondents get news from at least one outlet that they neither trust nor distrust.