A new survey of American religious congregations conducted by researchers from Duke University and the University of Chicago finds that, in recent years, more churches have become welcoming to openly gay and lesbian couples. These findings parallel broader trends showing greater acceptance among the general public of both homosexuality and same-sex marriage during roughly the same period. 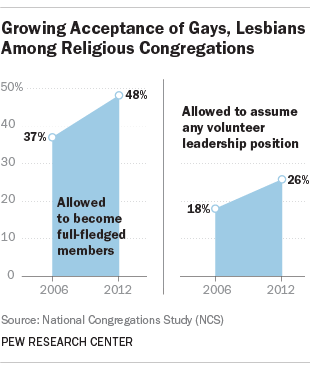 The report, “Changing American Congregations,” is part of the ongoing National Congregations Study (NCS). The Pew Research Center’s Religion & Public Life Project contributed funding to the study, which involved interviews with a clergyperson or other key member of each of the 1331 congregations surveyed.

The survey found that between 2006 and 2012, the share of congregations allowing an openly gay or lesbian couple to become full-fledged members grew from 37% to 48%. In addition, the number of congregations that allowed openly gay and lesbian members to assume any lay leadership position also increased – from 18% in 2006 to 26% in 2012.

These increases come as Americans in recent years have become much more accepting of gays and lesbians. For instance, according to data from the Pew Research Center, the percentage of adults in the United States who say that society should accept homosexuality has grown from 51% in 2006 to 62% in 2014.

Likewise, our data show that during the same period (2006 to 2014), acceptance of same-sex marriage among the general public grew from 35% to about half.

This sense of greater acceptance in society can also be seen in the views of gays and lesbians themselves. A 2013 Pew Research survey of the LGBT community found that 92% said they believed society had become more accepting of them than it was 10 years earlier. 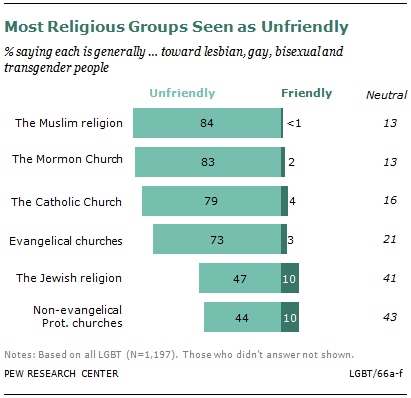 However, 29% of LGBT adults also said they had been made to feel unwelcome in a church or other place of worship. Many also rated specific religious groups as unfriendly toward the LGBT community, including eight-in-ten (79%) who said the Catholic Church is unfriendly toward LGBT people.

While churches overall, including many Protestant denominations, have become more accepting of LGBT adults, the NCS found that when it came to Roman Catholic congregations, the share that welcomed gay and lesbian couples actually dropped from 74% to 53% between 2006 and 2012. The authors of the study suggest that the decrease could be due to the “fallout from the [Catholic Church’s] child sexual abuse crisis, which some people associate with homosexuality.”