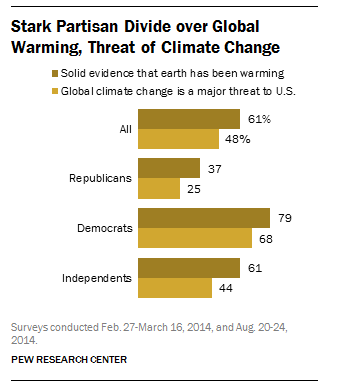 The United Nations is bringing together world leaders on Tuesday to focus on the challenge of climate change. In the U.S., a solid majority believe there is evidence that global warming is happening, but they do not rank global climate change as one of the top threats facing the country.

Although action against climate change is not a high priority, most Americans continue to believe that such warming is occurring. In Pew Research’s 2014 Political Typology survey, about six-in-ten Americans (61%) said there is solid evidence that Earth’s average temperature has been getting warmer over the past few decades, compared with 35% who disagreed. And most who believe the Earth is warming said it is primarily due to human activity (40% total), while 18% of the public said there is warming mostly because of natural environmental patterns.

Views about climate change and the environment are at the center of one of the U.S.’s sharpest ideological divides, as seen through the different opinions of the seven Typology groups in today’s political landscape. About nine-in-ten Solid Liberals (91%) said the Earth is getting warmer, but just two-in-ten Steadfast Conservatives (21%) agreed.