Venezuela has had a rough year. With inflation topping 60% in May, new talk of raising the country’s incredibly low gas prices and shortages of goods ranging from coffee to toilet paper, the socialist government is reaching out to allies in an effort to alleviate the country’s pervasive economic problems. Meanwhile, the Venezuelan public has very different views about two of the nation’s most important trade partners: the United States and Cuba.

Venezuela’s socialist leader Nicolás Maduro is no fan of the U.S., but that doesn’t mean Venezuelans take the same view. According to Pew Research Center’s Spring 2014 global survey, Venezuelans have generally positive attitudes concerning the U.S. At a rate of two-to-one, the Venezuelan public holds a more favorable (62%) than unfavorable (31%) view of their biggest trade partner. This represents a nine point uptick in support since 2013, when 53% shared positive feelings toward the U.S. Younger Venezuelans are especially likely to view the U.S. favorably – 66% of those ages 18-29 express a positive opinion. Still, a majority of those ages 50 and older (56%) also perceive the U.S. favorably. 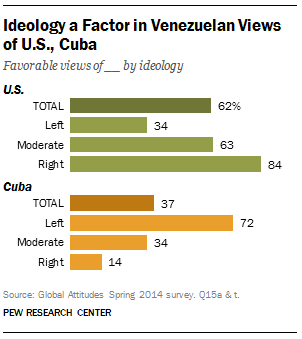 The biggest disagreements about the U.S. break along ideological lines. Venezuelans who lean to the right of the political spectrum see the U.S. in an overwhelmingly positive light (84%), while only 12% have a negative opinion. Venezuela’s political left, which aligns with President Maduro’s United Socialist Party of Venezuela, tends to be more critical of the U.S. (62% unfavorable v. 34% favorable). This is none too surprising given the tumultuous relationship between Maduro and the U.S. in recent months and the many years of tension between Washington and Maduro’s predecessor, Hugo Chávez. Chávez, who blamed the U.S. for organizing a coup against him in 2002, often stoked anti-American sentiment with colorful quips, including claims that the U.S. “invented technology to spread cancer” to South American leaders and referring to then-President George W. Bush as “the devil,” “a donkey” and “a drunkard.” Despite this, a majority of moderates (63%) see America favorably.

Meanwhile, most Venezuelans have a negative opinion of Venezuela’s political and economic ally, Cuba. The two countries have a very interdependent relationship, with Venezuela sending Cuba subsidized oil in exchange for Cuban doctors, teachers and military advisors. Yet 57% of Venezuelans give Cuba an unfavorable rating, with fully 38% saying they have a very unfavorable impression of their trade partner. Only 37% have a favorable outlook.

The most notable difference of opinion hinges on political ideology. While roughly seven-in-ten (72%) left-leaning Venezuelans view Cuba favorably, only 14% on the right share this attitude. Moderates also tend to be more disapproving of Cuba (34% favorable v. 54% unfavorable). Protestors in Caracas earlier this year, lauded by opposition groups in both Venezuela and Cuba, attributed such feelings to the perceived “Cubanization” of Venezuela, claiming that the Cuban government increasingly plays a role in Venezuelan efforts to suppress dissidents and wants to force Cuba’s strict socialist ideas onto Venezuelans.