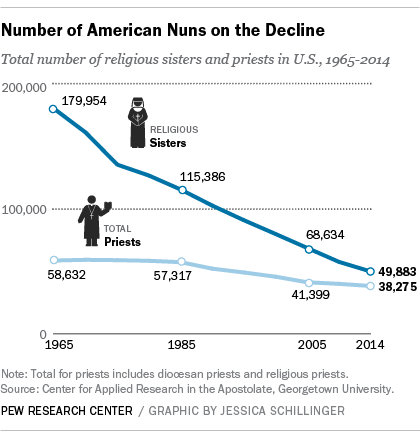 The Leadership Conference of Women Religious (LCWR), which includes representation from more than 80% of American nuns, is set to hold its annual assembly next week in Nashville. The meeting comes as the organization continues to draw scrutiny from the leadership of the Roman Catholic Church, and also at a time when there has been a steep decline in the number of nuns.

The Vatican first began taking a hard look at some organizations of U.S. nuns about five years ago, eventually ordering an investigation and a “doctrinal assessment” of the LCWR – and a plan for organizational reform.

While the church’s specific concerns with the nuns are complex, a few major areas were highlighted in a 2012 Vatican document, which said the LCWR was “silent on the right to life from conception to natural death” and that Roman Catholic views on the family and human sexuality “are not part of the LCWR agenda in a way that promotes Church teaching.” The document also raised concerns about “radical feminist themes” at programs sponsored by the LCWR, and cited addresses at LCWR assemblies that “manifest problematic statements and serious theological, even doctrinal errors.”

More recently, Cardinal Gerhard Mueller, the prefect of the Vatican’s Congregation for the Doctrine of the Faith, criticized the LCWR in an April address before a meeting with the organization and reiterated the Vatican’s intention to require approval for speakers and awardees at LCWR events.

In addition to Vatican scrutiny, nuns also face a big challenge in their dwindling ranks. The total number of nuns, also called religious sisters, in the United States has fallen from roughly 180,000 in 1965 to about 50,000 in 2014 – a 72% drop over those 50 years – according to the Center for Applied Research in the Apostolate (CARA) at Georgetown University. While the total number of priests (diocesan and religious) also has fallen over that period, it has done so at a much slower rate (from about 59,000 to 38,000, a 35% drop).

Globally, the number of nuns also is declining, but not nearly as fast as it is in the U.S. In 1970, U.S. nuns represented about 16% of the world’s religious sisters; now, American nuns are about 7% of the global total (just over 700,000), also according to CARA.

A separate survey we conducted in 2013 asked U.S. Catholics, in an open-ended question, to name the most important way the church helps society: helping the poor – part of the core mission of the LCWR – or other charitable works, was by far the most popular answer (27%).

Topics
Catholics and CatholicismReligious Beliefs and Practices
Share this link:

Large Majorities of Catholics Satisfied with Pope, Church Leaders
Recent Chinese dealings with faith groups reflect a pattern of government restrictions on religion
Three-quarters of U.S. Catholics say it’s important for Pope Francis to tackle Vatican reform
The number of U.S. Catholics has grown, so why are there fewer parishes?
Under Pope Francis, the College of Cardinals has become less European
Biden Begins Presidency With Positive Ratings; Trump Departs With Lowest-Ever Job Mark
How lawmakers’ social media activity changed in the days after the U.S. Capitol riot
In their own words: How Americans reacted to the U.S. Capitol riot
Five facts about the QAnon conspiracy theories
Views of the conduct of Biden and Trump during the transition