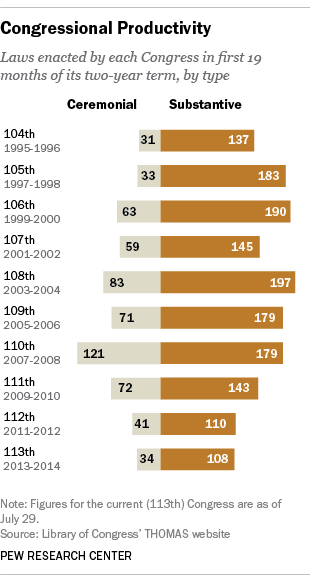 Congress this week scrambled to finish several pieces of business, from increasing aid to Israel to addressing the child-migrant crisis and patching the Highway Trust Fund, before leaving Washington for its scheduled August recess. But being out of town may not noticeably affect Congress’ legislative productivity.

As of Wednesday the current Congress had enacted 142 laws, the fewest of any Congress in the past two decades over an equivalent timespan. And only 108 of those enactments were substantive pieces of legislation, under our deliberately broad criteria (no post-office renamings, anniversary commemorations or other purely ceremonial laws). That’s two fewer than the previous Congress — itself not generally considered a model of productivity — had managed by this point in 2012. (As The Washington Post recently pointed out, Congress has a long history of dithering and squabbling rather than legislating during the dog days of summer.)

Still, it’s not as though nothing has been accomplished. Besides the Harmful Algal Bloom and Hypoxia Research and Control Amendments Act, the Huna Tlingit Traditional Gull Egg Use Act and a measure “to specify the size of the precious-metal blanks that will be used in the production of the National Baseball Hall of Fame commemorative coins,” here are some of the more significant laws passed so far by the current Congress:

What’s the reason for the low legislative activity? President Obama and the Democrats who control the Senate blame Republicans for wasting time on measures that have no chance of becoming law, while House Republicans accuse Senate Majority Leader Harry Reid of deliberately sitting on House-passed bills for political gain.

Members of Congress tend to act like harried undergraduates, leaving their hardest assignments till the end of the term and then finishing with a blizzard of activity. Among the past seven Congresses, between 39% and 59% of all the substantive laws they passed came in the last five months of their respective two-year terms; the average was 49%. So politics aside, recent history suggests that there’s still time for major legislation to emerge from the 113th Congress.