Pope Francis is scheduled to visit Jordan, the West Bank and Israel this weekend. Since becoming pope, he has expressed concern for the situation of Christians in the region, whom he said “suffer in a particularly severe way the consequences of tensions and conflicts in many parts of the Middle East.” After meeting with Christian leaders from the region last fall in the Vatican, Francis said he and other Catholic leaders “will not resign ourselves to imagining a Middle East without Christians.” 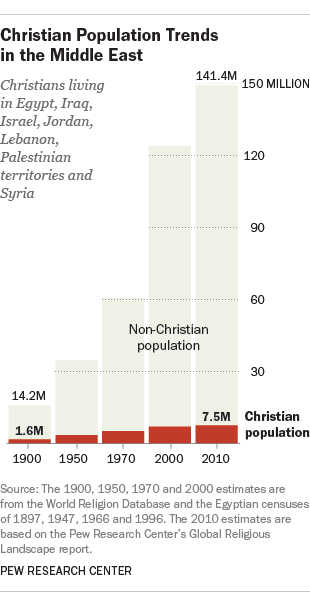 Since 2010, there has been considerable population change in the region due to war in Iraq and Syria, hostilities in other countries and related migration, but there is little reliable data to measure overall regional shifts in the last few years. Many Christians have left Iraq in recent years, though many stayed in the Middle East, fleeing to neighboring countries such as Jordan.

Pew Research has found rising social hostilities related to religion in the region since 2007. Christians faced religious harassment in a greater share of countries in the Middle East and North Africa than in any other region in 2012 (the most recent year for which data are available).

Egypt has the largest Christian population in the Middle East, according to Pew Research estimates, which are based on Egyptian censuses. Leaders of the Coptic Orthodox Church in Egypt claim a much higher number of Christians in Egypt than are seen in Egypt’s census.