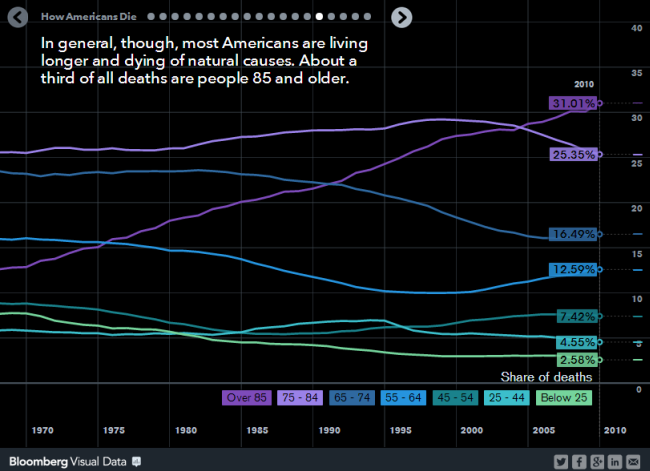 But the downside of living longer is the higher rates of dementia, senility and Alzheimer’s in the population, which are also more costly. In 2010, the Centers for Disease Control and Prevention documented 180,021 such cases compared with just 293 such cases in 1968.

The findings come from a series of charts in a new Bloomberg slideshow, “How Americans Die” (whose cover page of a foggy cemetery is almost as cheery as the title itself). Bloomberg weaved together data from the health world to form a statistical portrait of U.S. deaths. They explored trends such as the narrowing ‘mortality gap’ between men and women, the increase in suicides and drug-related deaths among 45- to 54-year-olds, and the spike in deaths in the mid-1990s among those ages 25 to 44 due to HIV/AIDS.

Americans lost more years of life to COVID-19 in 2020 than to all accidents combined in a typical year
10 facts about the death penalty in the U.S.
California is one of 11 states that have the death penalty but haven’t used it in more than a decade
Republicans remain far less likely than Democrats to view COVID-19 as a major threat to public health
California legalizes assisted suicide amid growing support for such laws