The American Israel Public Affairs Committee (AIPAC), which holds its annual policy conference in Washington, D.C., beginning Sunday, is sometimes referred to as the “Jewish lobby.” But its mission is as an Israel lobby, and when it comes to public backing for that country in the U.S., evangelical Christians are even more supportive of Israel than American Jews by some measures. 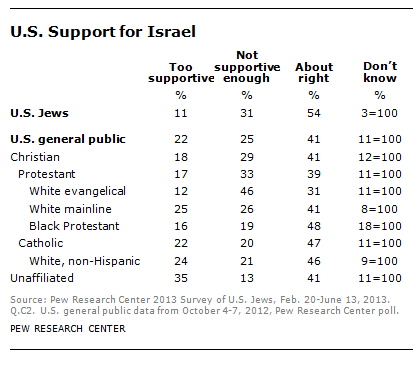 AIPAC itself has taken note of that fact, making clear that its work is not limited to Jews. Its website refers to activists across all religions and says that “the evangelical Christian community plays an increasingly vital role.”

Pew Research surveys find that similar shares of Christians (29%) and Jews (31%) say the U.S. is not supportive enough of Israel. Among white evangelical Protestants, nearly half (46%) say that the U.S. is not providing enough support for Israel.

This year’s conference comes at a sensitive time for AIPAC, which has been at odds with the White House over a Senate bill that would impose new sanctions on Iran for its nuclear program. When we asked Americans in 2012 what the U.S. should do if Israel attacks Iran to stop Iran’s nuclear program, 64% of white evangelicals said “support Israel,” while just 39% of the general public agreed. 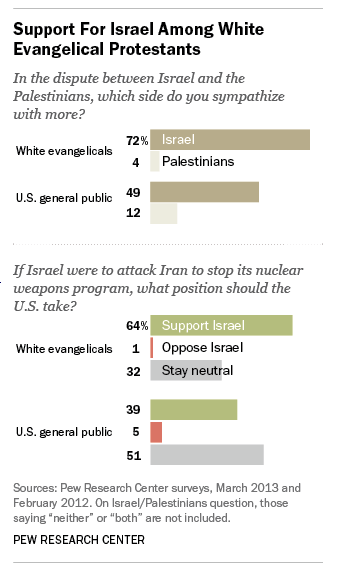 Meanwhile, U.S. Secretary of State John Kerry is trying to broker a peace agreement between Israel and the Palestinians amid a Palestinian-led, international movement of “boycott, divestment and sanctions” directed against Israel as a response to the Jewish presence in the West Bank.