Like many presidents, Barack Obama has seen highs and lows over the course of his time in office when it comes to how well Americans think he is doing his job. In the afterglow of his election in 2008, his first rating started at what still stands as a high—64%. And, after what was sometimes referred to as a “second-term curse” year in 2013, he hit his low last November at 41%. 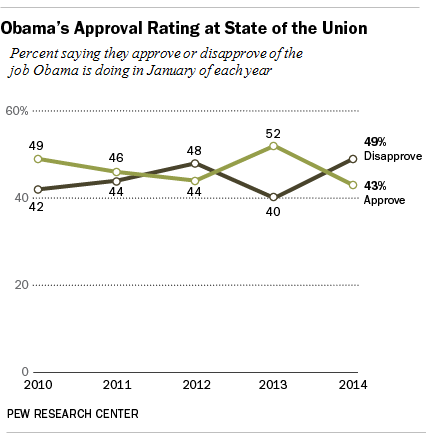 When Obama takes the rostrum Tuesday night for his fifth State of the Union, he will be speaking at a time when his current approval rating stands at 43%.

Last year was the only time just before a State of the Union that more than half the public gave Obama positive marks for the job he was doing, when 52% approved. Obama was riding the wave of his successful re-election campaign, which put him in a stronger position with the public than he was during much of his first term. He was also helped by the relative poor standing of the Republicans, whose favorable ratings had dropped significantly over the previous months.

While Obama suffered a difficult year after his re-election victory, his second-term woes are far less than that of his predecessor, George W. Bush, when measured by approval ratings at the beginning of the year.

During his first term, Bush’s approval rating stood at 56% or higher before each of his State of the Union addresses, including a sky-high 80% in Jan. 2002 when he was still benefiting from the high marks Americans gave him for his handling of the aftermath of the 9/11 terrorist attacks.

But as the Iraq and Afghanistan conflicts began to take their toll in his second term, followed by economic woes, Bush’s ratings nosedived. Bush’s approval stood at 50% before the first State of the Union of his second term (having said after his re-election, “I’ve earned capital in this election—and I’m going to spend it for what I told the people I’d spend it on.”) But his approval dropped into the 30s in advance of every State of the Union after that, settling at a low of 31% before his final address in 2008.