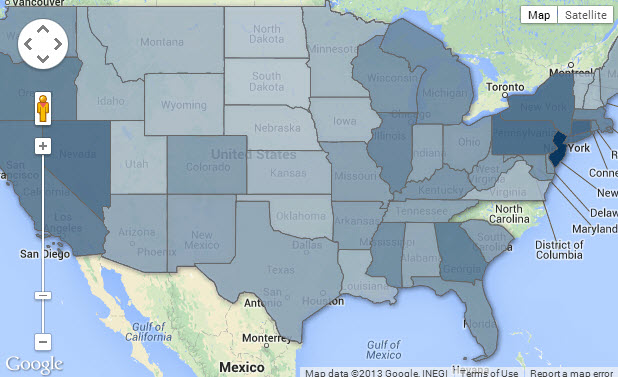 Congress finished up this year’s session without taking action to extend unemployment insurance, meaning that an estimated 1.3 million out-of-work Americans will lose their benefits effective Saturday. The program had begun under former President Bush in 2008 when the financial crisis began and pushed the economy into a deep recession, and it had been extended regularly until now.

A new extension of the benefits was not included in the budget compromise approved by the Republican-controlled House in mid-December. Senate Majority Leader Harry Reid has promised to hold a vote in that chamber in early January on a bipartisan plan to extend the benefits by three months.

The map above from the Washington Post, based on Labor Department figures compiled by Democrats on the House Ways and Means Committee, provides a snapshot of where the loss of benefits will hit most, indicated by states in darker shades of blue. The interactive version, which you can access by clicking on the map, allows you to click on a state and see its unemployment rate and the number of those who will lose benefits. Eligibility for benefits vary by state with each state determining who meets the requirements, benefit amounts and the length of time benefits are available.

The darkest state on the map is New Jersey where the Post says 90,300 people will lose benefits immediately. Unemployment in New Jersey has been above the national average for most of the post-financial crisis period. The jobless rate in the state currently stands at 7.8%, compared to a national average of 7%.