The latest chapter in the saga of Edward Snowden, whose leaks of NSA documents set off a continuing debate about the NSA mass surveillance programs, is his offer to Brazil to help it investigate U.S. spying there if that country gives him political asylum. That follows on the heels of a U.S. court ruling on Monday that the NSA’s collection of Americans’ phone data probably violated the Constitution — a ruling that Snowden and his allies said vindicated him. 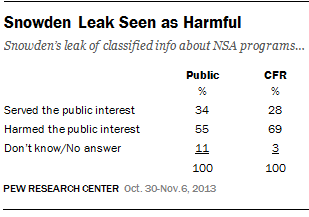 But to date, Americans on balance have had a negative view of Snowden’s leaks. In a Oct. 30-Nov.6 survey conducted before the court ruling, 55% said the leaks had harmed the public interest while 34% said it served it, with 11% expressing no opinion.