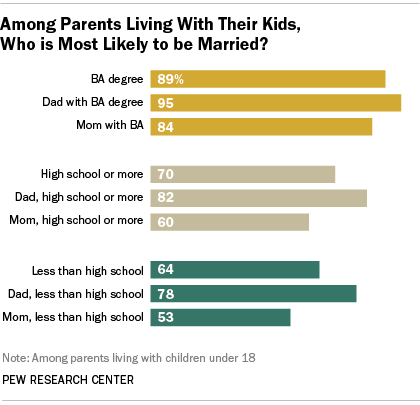 New data released this week from the U.S. Census Bureau reaffirm the strong linkage between educational attainment and the marital status and living arrangements of parents of minor children.

Marriage has been on the decline for decades, particularly for those with less education. At the same time, the share of non-marital births for the less educated has risen dramatically, and the likelihood of divorce remains significantly higher among those lacking a college degree than among those who have one.

Not only is there an educational gap in the likelihood of  parents living with their minor children being married, but there is a gender gap as well.

Just over half (53%) of  mothers who lack a high school diploma and who live with their children are married, as compared with 78% of dads with the same educational level. These gender differences narrow considerably — but still persist — among the most educated. Some 84% of moms who have a bachelor’s degree and live with their children are married, compared with 95% of dads with a bachelor’s degree.