A major new Pew Research Center survey of American Jews includes an analysis of the views and characteristics of non-Jewish people with a “Jewish affinity.” This group includes those who identify with a religion other than Judaism (in most cases Christianity) and have no direct Jewish ancestry, but who nevertheless consider themselves to be Jewish in some way. This group represents 0.5% of U.S. adults, or about 1.2 million people. 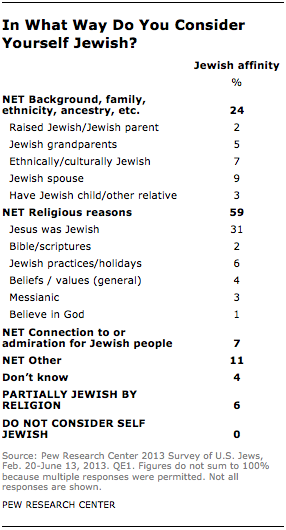 Six-in-ten of those in the Jewish-affinity category say they think of themselves as Jewish for religious reasons, including 31% who say they are Jewish because Jesus was Jewish. Smaller portions consider themselves Jewish because they observe Jewish practices and holidays (6%) or have shared beliefs and values (4%).

People of Jewish affinity are almost as likely as U.S. Jews to say they feel very emotionally attached to Israel (26% vs. 30%). And they are somewhat more likely than Jews to say that the United States is not sufficiently supportive of Israel (41% vs. 31%).

But compared with people who say they are Jewish by religion, those of Jewish affinity are far less involved with Jewish institutions. Relatively few live in a household where someone belongs to a synagogue (4%) or another Jewish organization (7%). While these levels of organizational involvement roughly match those seen among secular Jews, they pale in comparison with those of Jews by religion.