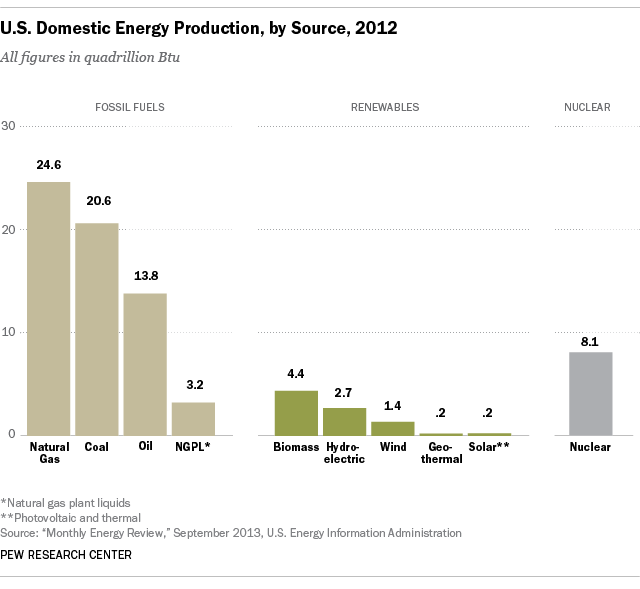 Though many Americans apparently don’t realize it, the U.S. is producing considerably more of its own energy. Last year the U.S. generated a record 79.1 quadrillion Btu (British thermal units) domestically, nearly 14% more energy than in 2005, largely due to increased production of oil and natural gas. 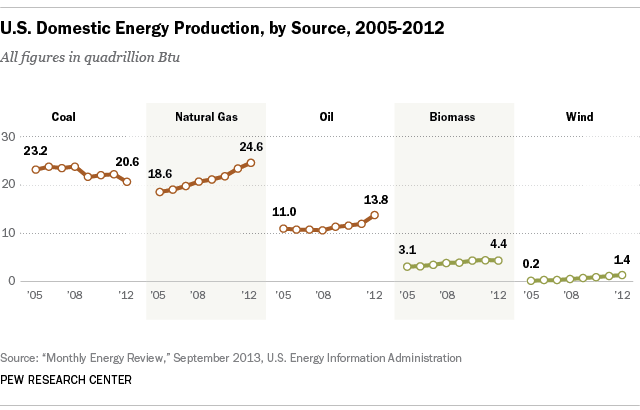 Beginning in 2011, natural gas supplanted coal as the nation’s single-biggest source of domestically produced energy, according to data from the U.S. Energy Information Administration. In the first half of this year, 11.95 trillion cubic feet of “dry” (or consumer-grade) natural gas were produced, slightly above the same period last year and 7.9% more than in the first six months of 2011.

Coal, however, still accounted for 39% of U.S. electricity generation in the first seven months of this year, up from 36% in the same period last year, according to the EIA’s “Electric Power Monthly” report. The natural-gas share of power generation fell from 31% to 27%. Coal’s prominence raises the stakes for the Obama administration’s plans to limit carbon dioxide emissions from power plants.

The share of total U.S. energy produced from renewable sources — biomass, hydroelectric, wind, solar and geothermal — has crept higher over the past six years, responding to both government policies (from federal tax credits to state standards for electricity generators) and public pressure. The renewable share of domestic energy production grew from 7.2% in 2001 to 11.8% in the first half of this year.

Bonus fact: What’s a Btu? A Btu, or British thermal unit, is the amount of energy needed to raise or lower 1 pound of water 1 degree Fahrenheit. Scientists generally use the joule as a unit of energy rather than the Btu (one Btu is  about 1,055 joules), but the U.S. government continues to measure energy production and consumption in Btu.