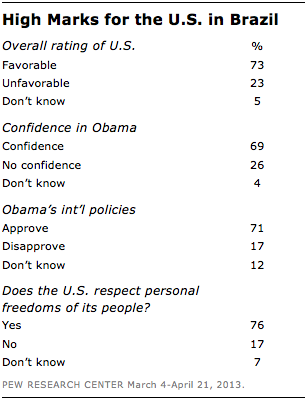 In response to revelations that the NSA may have spied on her and many others in her country, Brazilian President Dilma Rousseff took the unusual step Tuesday of postponing a state visit to the United States. It was yet another sign that leaks by former NSA employee Edward Snowden are having far reaching effects on U.S. diplomacy, this time damaging relations with one of America’s most important partners in Latin America.

The Snowden affair could also potentially damage America’s public image in a country where the U.S. and President Obama have been widely popular in recent years. In a spring 2013 Pew Research Center poll, 73% of Brazilians expressed a positive opinion of the U.S. Among the seven Latin American nations surveyed, only Salvadorans gave the U.S. a better rating (79% positive).

President Obama – who spoke with Rousseff Monday night in an unsuccessful attempt to change her mind – also received high marks. Roughly seven-in-ten Brazilians (69%) said they have confidence in Obama to do the right thing in world affairs, by far his highest rating in the region.

And while support for Obama’s policies has declined around much of the world over the last few years, it has actually increased in Brazil. In 2013, 71% said they approve of Obama’s international policies, up from 59% in 2012. Among the 39 nations polled in 2013, only Germany (88%), France (81%), the Philippines (76%), South Korea (73%), Spain and the Czech Republic (72%) offered more positive assessments of Obama’s policies.

Aspects of U.S. soft power score well in Brazil, too. Brazilians embrace American pop culture, ways of doing business, and ideas about democracy. And – at least prior to the Snowden affair – the U.S. was widely admired for respecting individual liberty. Fully 76% of Brazilians said the American government respects the personal freedoms of its people. The degree to which the NSA scandal will affect this strong suit of America’s image in Brazil, and other countries, remains to be seen. But Glenn Greenwald, the Guardian columnist who broke the Snowden story, and is also a Rio de Janeiro resident, says more revelations are on the way.