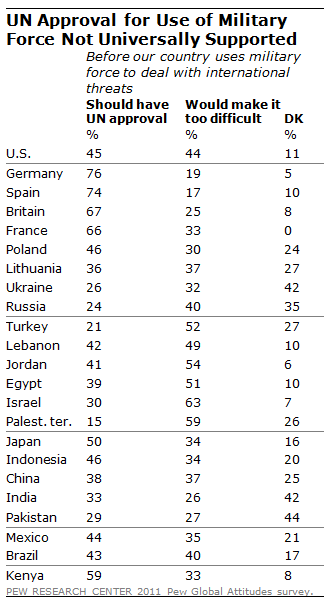 The UN Security Council failed Wednesday to reach agreement on a British-sponsored resolution authorizing “necessary measures… to protect civilians” in Syria. It was an effort to gain multilateral approval for the impending use of military force by the United States and like-minded allies against the Syrian regime of president Bashar al-Assad for its alleged use of chemical weapons against Syrian civilians.

The UN charter preempts the use of military force except in self-defense or with Security Council approval. But a military strike against Syria without UN authorization would not be without precedent. In 1999, the U.S. and its NATO allies bombed Serbia for 78 days in an ultimately successful effort to force the government of Slobodan Milosevic to withdraw from Kosovo. And in 1998, Washington launched missile strikes against al Qaeda targets in Sudan and Afghanistan. Neither action had the blessing of the Security Council.

Nor do publics around the world universally support the principle of obtaining UN sanction before engaging in military action. A 2011 Pew Research Center survey of 23 countries found that in only 9 of these nations did a majority or plurality of the public say UN approval was needed to deal with international threats. In six countries, majorities or pluralities thought seeking approval was not necessary. Publics were divided in eight countries. Moreover, in nearly half the countries, one-in-five of those surveyed voiced no opinion on UN approval of the use of force.

Notably, given London’s attempt to get Security Council approval for some military action in Syria, only in Western Europe – in Germany (76%), Spain (74%), Britain (67%) and France (66%) – did strong public majorities back UN authorization. Americans were divided: 45% thought approval was needed, 44% did not agree.

Roughly half or more of the publics in countries neighboring Syria did not support seeking UN blessing for military action, including 59% in the Palestinian Territories, 54% in Jordan, 51% in Egypt and 49% in Lebanon.

Overall, a 2013 Pew Research survey, conducted before the recent allegations that the Syrian regime had used chemical weapons, found that despite widespread concern that the violence in Syria would spread to other countries in the region, there was limited support for military intervention, either by Western nations or by other Arab states.

Both the Chinese and the Russian governments are widely reported to have opposed UN approval of military action against Syria. But, at least in principle, their publics do not think such authorization is even needed. In 2011, only 24% of Russians thought it was necessary to seek Security Council authorization before using military force to deal with international threats. And only 38% of Chinese saw a need to first go to the UN to obtain its blessing.