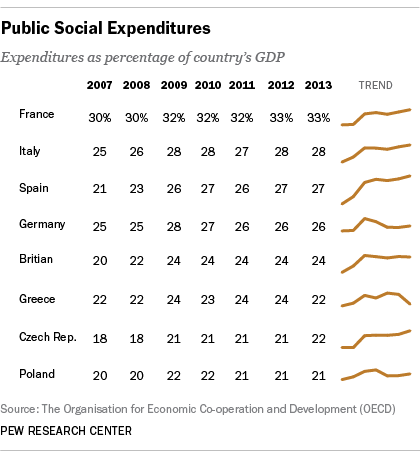 Most developed countries substantially increased social-welfare spending during and after the global financial crisis, but in Europe many people seem ready to ratchet government spending back down.

According to new estimates for 29 countries from the Organization for Economic Cooperation and Development, France spends the most public money on social-welfare programs as a share of its total economy: an estimated 33% of GDP this year, up from 32.5% last year and 29.7% in 2007. 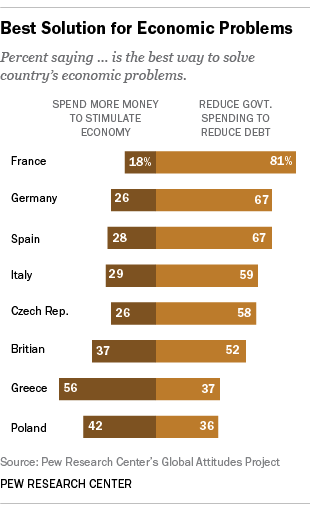 Interestingly, the French also were most likely to support cutting government spending as a solution to its economic problems, according to the spring global attitudes survey by the Pew Research Center: 81% of the French public said they preferred cuts rather than trying to stimulate the economy through increasing government spending. That was the highest support level for cuts among eight European countries (the only ones in the global survey that were asked that question).

However, majorities in five other countries also said they favored cuts over stimulus; Greece was the only country where a majority of those surveyed favored stimulus over cuts, while Poland was closely divided.

The findings suggest that, in most countries surveyed, people think government social expenditures may have reached — or exceeded — their limit. That includes some countries, such as Spain and the Czech Republic, where social expenditures have continued to climb as a share of GDP.

The OECD defines “social expenditures” to include old-age pensions, health care, unemployment insurance, job-training programs, disability and survivors’ benefits, housing assistance, family-support payments, and similar programs — both cash payments and in-kind benefits. The organization has detailed statistics through 2009 and estimates of aggregate social expenditures as a share of GDP for 2010-13.