In recent weeks, President Obama has been on the road citing the need for programs that bolster the middle-class. But having weathered a recession that staggered the economy, a 2012 survey shows Americans have changed their views on what it takes to be part of the middle-class. 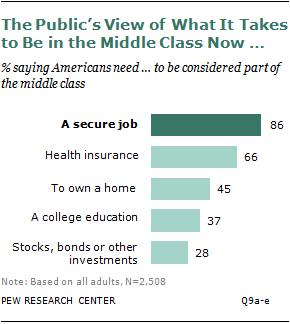 Nearly nine-in-ten adults (86%) say a person needs a secure job to be considered part of the middle class, while just 45% say the same about owning a home, 37% about a college education and 28% about financial investments. 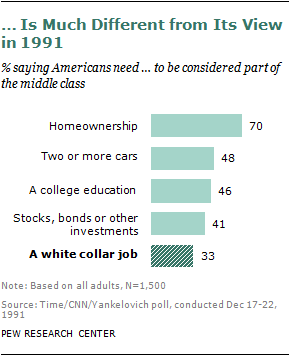 The public’s view about what it takes to be in the middle class appears to have changed dramatically over the past two decades. In a 1991 nationwide Time/CNN/Yankelovich survey, seven-in-ten respondents said homeownership was essential to being in the middle class, while just one-third said the same about having “a white collar job.”

Some of the sharp differences between the public’s responses in 2012 and 1991 are likely the result of wording differences between the two surveys: “a white collar job” (the wording used in the 1991 survey) is arguably a narrower and less compelling choice than “a secure job.” But some of the variance may also reflect the persistently high unemployment rates of the past few years as well as a longer-term decline in the share of the working-age public that is employed.