Now that the Senate has approved an overhaul of the nation’s immigration laws, the issue moves to the House where Republicans, who control that chamber, held a private session Wednesday to discuss what the GOP should do. The outlook is less certain in the Republican chamber, in part because of the sizable contingent of Tea Party Republicans. 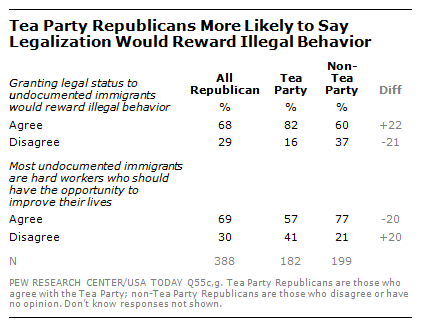 One objection raised to providing a path to legal status for undocumented immigrants in the U.S. has been the idea that such action would reward them for illegal behavior. While 68% of all Republicans hold that view, this belief is particularly pronounced among Republicans who say they agree with the Tea Party. More than eight-in-ten (82%) regard legalization of an undocumented immigrant’s status as such a reward.

Democrats have some of their own divides, too. About six-in-ten (59%) of Democrats overall disagree with the idea that legal status for undocumented immigrants would take jobs from U.S. citizens, but that percentage is 74% among liberal Democrats compared to 51% among moderate-to-conservative Democrats. More moderate-to-conservative Democrats (56%) say granting legal status to undocumented immigrants would be a drain on government services, but only 37% of liberal Democrats agree. Read more

On immigration, Republicans favor path to legal status, but differ over citizenship

Republicans face a divide in their party on immigration

5 Facts about Republicans and immigration

Most Americans agree on immigration-reform approach, but differ on timing