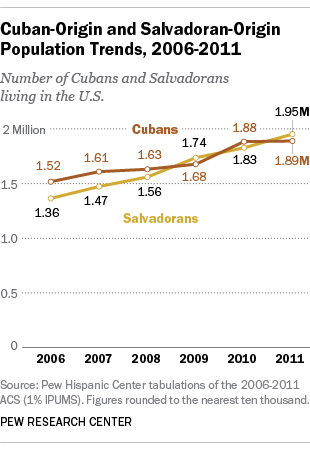 For more than 40 years, one rock-solid element of Hispanic demographics has been the relative ranking of the three largest Hispanic-origin groups: Mexicans have always been the largest by population, followed by Puerto Ricans and then Cubans.

But this may be changing.

According to Pew Research Center’s most recent estimate based on the 2011 American Community Survey, there were 1.89 million Cubans and 1.95 million Salvadorans living in the U.S. Statistically speaking, those two estimates are indistinguishable from each other, and it’s been that way since 2008.

So, in the not-too-distant future, the third largest Hispanic-origin group might be Salvadorans. And more change may be on the way: demographics and immigration patterns show the Dominican population is close behind–it has grown 27% since 2007, from 1.2 million to 1.53 million.