In a Pew Research Center survey in March, only 16% of Americans rated the nation’s economic condition as “excellent” or “good.” Ordinarily that would be nothing to write home about, except that it was the highest positive rating in five years.

Over the course of several surveys before the Great Recession hit, about a third of Americans typically would call the economy excellent or good, while between 20% and 30% would call it poor and about four-in-ten or more rated it as “only fair.” 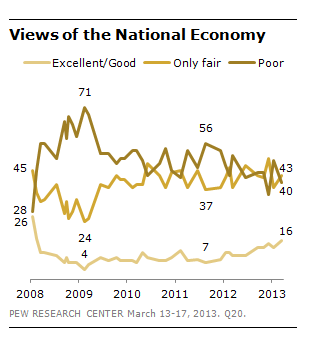 Those numbers began to deteriorate sharply starting in late 2007 as the nation’s economic crisis took hold. In February 2008, only 17% of people rated the economy excellent or good and, a year later, only 4% gave the “good” response, ( no one used excellent). In that month’s survey, 71% called the economy poor.

Although the recession was declared over in June 2009 by the National Bureau of Economic Research, Americans have remained deeply skeptical of the recovery. Only since last fall has the percentage calling it excellent or good consistently remained above 10%. Most people still rate the economy “only fair” (43% in the most recent survey) or poor (40%).  In addition, a plurality (40%) in the March survey said it would be a long time before the economy recovers and 31% said it was not recovering but would soon. Read more