The public’s views of current economic conditions remain largely negative. And an increasing percentage thinks that the economy will be worse a year from now than it is today. 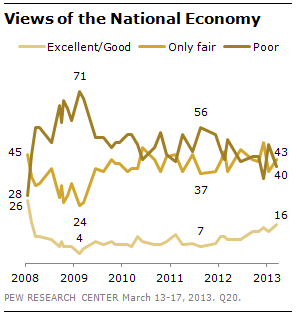 Opinions about the national economy vary only modestly by family income: No more than about one-in-five in any income category rates the economy positively. There continue be partisan differences in views of economic conditions – Republicans (53%) and independents (42%) are more likely than Democrats (27%) to rate current economic conditions as poor.

Consistent with the negative economic ratings, only 27% say the economy is currently recovering. About three-in-ten (31%) say the economy is not yet recovering but will recover soon. A 40% plurality says it will be a long time before the economy recovers. These opinions have changed little since last October. 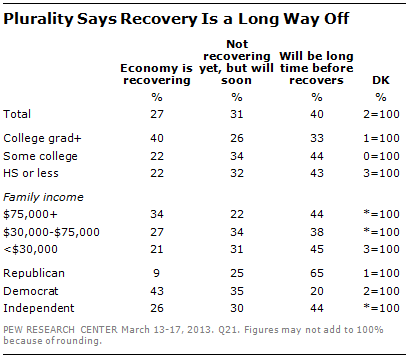 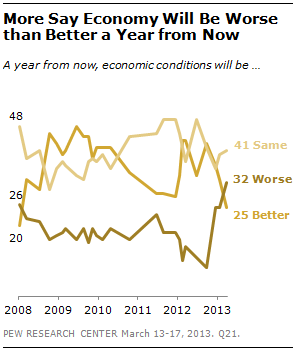 For the first time in Obama’s presidency, more say they expect economic conditions to be worse a year from now (32%) than better (25%); 41% expect conditions to be about the same as now. In January, opinion was flipped, with somewhat more expecting the economy to be better in a year (33%) than worse (25%). Last March, 44% expected that economic conditions would be better in a year, while just 14% said they would be worse. 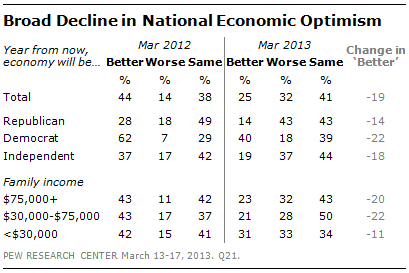 As in recent years, Democrats have a more positive economic outlook than do independents or Republicans. But among all three groups, economic optimism has declined since last year. Currently, 40% of Democrats say they expect economic conditions to be better a year from now; 62% expressed that view last March. Among independents and Republicans, economic optimism also has declined since last March (by 18 points and 14 points, respectively).

In the current survey, 32% say the job situation is the national economic issue that most worries them. But nearly as 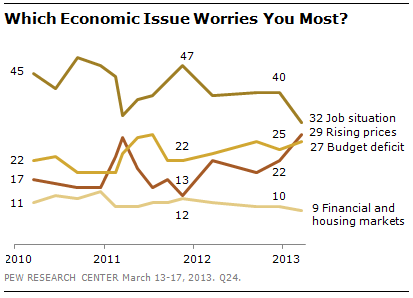 many (29%) cite rising prices, while 27% say that the federal budget deficit is their biggest economic worry. Just 9% say problems in the housing and financial markets are their top economic worry.

In December, 40% said jobs were the issue that most worried them, while 25% said the budget deficit and just 22% named rising prices; 10% said problems in the markets.

Gas, Food Prices Seen as Having Biggest Impact on Finances 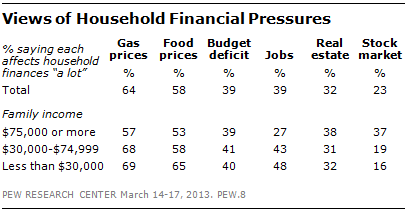 Gas prices are an especially pressing concern for those with family incomes below $75,000 a year. Nearly seven-in-ten (68%) of those earning less than $75,000 a year say gas prices affect their household’s financial situation a lot, compared with 57% of those earning $75,000 or more. People with incomes of less than $75,000 also are more likely than those with higher incomes to say that their household finances are affected a lot by the availability of jobs in their area. 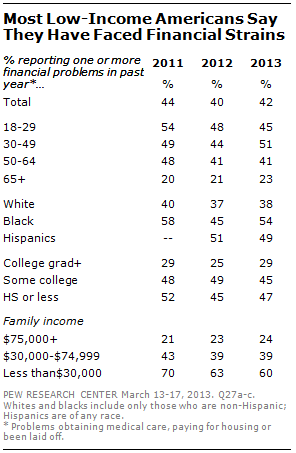 More than four years after the start of the recession, most Americans with low family incomes are experiencing financial problems. Overall, 42% of the public say they have faced one or more of the following in the past year: difficulty obtaining or paying for medical care; problems paying their rent or mortgage; or losing a job.

Blacks continue to be much more likely than whites to face these financial problems. About half of blacks (54%) say they have either had problems getting or paying for medical care, trouble affording their rent or mortgage or been laid off. By comparison, 38% of whites have faced one or more of these problems.

Despite the gloomy outlook for the national economy, most people (60%) continue to say that their own finances will improve at least some over the course of the next year. While views of personal finances vary little across age groups, financial optimism continues to be more widespread among younger people: 77% of those younger than 30 expect their finances to improve, as do 70% of those 30 to 49; fewer than half (44%) of those 50 and older expect their finances to improve. 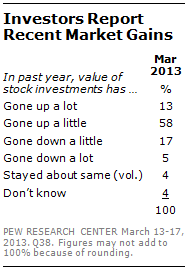 Americans who have money in the stock market (45% of the public) say they have reaped benefits from the market’s gains. Most of those with money invested in the market say their investments have gone up a little (58%) or a lot (13%) over the past year. Just 22% of investors say their portfolio has lost value over the past year. 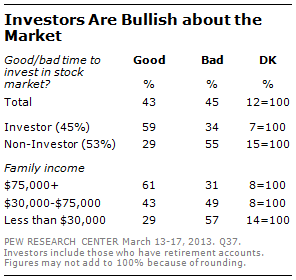 A related Pew Research Center report, published last October, found that Americans are more worried about their retirement finances today than they were at the end of the recession in 2009. (See “More Americans Worry about Financing Retirement,” Oct. 22, 2012.)

On the Job, Some Say the Workload is Rising

The percentage of Americans who say they have gotten a better job, or received a raise at their current job, has remained steady in recent years. About three-in-ten people (28%) – 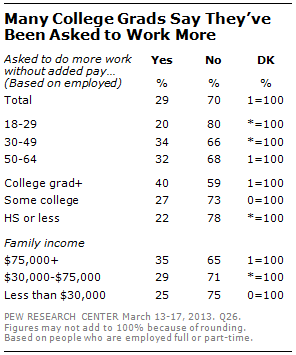 including 44% of those working full or part-time – say they have gotten a better job or gotten a raise in the past year.