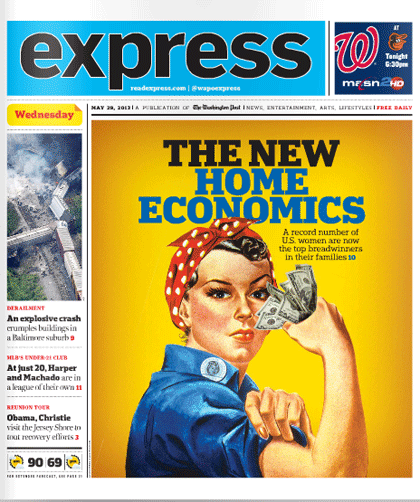 Our new report on “Breadwinner Moms” has been the focus of widespread media coverage and much discussion about its finding that mothers are now the sole or primary income provider in a record 40% of households with children.

“Breadwinner Moms” could just have aptly been called, as it was by Washington, D.C.’s daily newspaper, the Express, “The New Home Economics,” with its adaptation of the iconic picture of Rosie the Riveter who symbolized the women who took jobs in U.S. munitions plants during World War II to replace the men who had gone off to war.

What has fueled much of the conversation was what the Washington Post called the “sweeping change in traditional gender roles and family life over a few short decades” and how the public has viewed them. Some findings:

Use our comments section (below) to tell us your story: the experiences you’ve had, how they’ve compared to what we found in the study, what you think of the changes and what they mean for society.

See what some others around the country have said in interviews with their local news outlets: