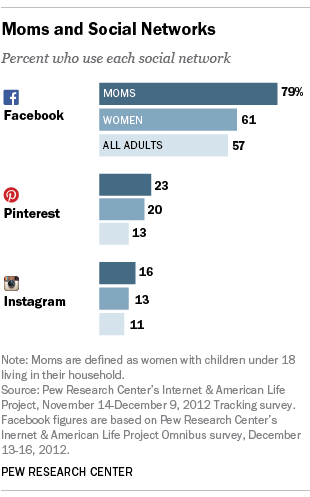 Are you planning to wish your mom a Happy Mother’s Day on Facebook? If so, you’re not alone. “Moms” (defined as women with a child or children under the age of 18 living at home) are especially likely to be Facebook users, even compared with dads, or with other women, according to Pew Research Center’s 2012 data on social networking. Some 79% of moms use Facebook, compared with 61% of all women and 57% of men with a minor child living at home. (As of December 2012, 54% of all American adults and 67% of internet users use social networking sites.) 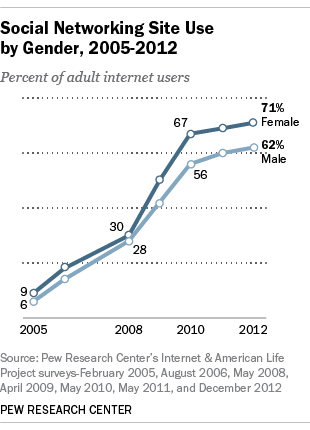 Perhaps it’s not surprising so many moms are on Facebook. Women surpassed men in their social networking site usage several years ago and since then they have been consistently more likely than men to use online social networks.

Previous research from the Pew Internet & American Life Project has shown that teens have mixed feelings about being friends with their parents on Facebook. Even so, the vast majority of parents and teens friend each other. In 2011, 80% of parent social media users whose children were also users of social media have friended their child on the sites.

So if you do reach out to Mom on Facebook, statistically speaking, there’s a good chance she’ll be watching her newsfeed — and yours.