In the federal budget he proposed last month, President Obama included proposals to seek savings in Medicare and Social Security as part of his strategy to rein in the growth of those programs and break a deadlock with Republicans on how to tackle the deficit. 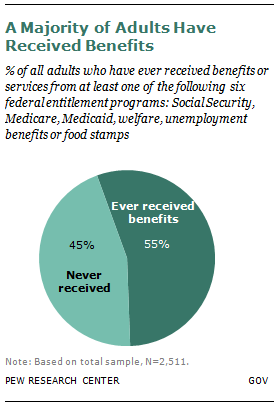 A Pew Research Center survey conducted Nov. 28-Dec.5 2012 found that 55% of Americans have received government benefits from at least one of the six best-known federal entitlement programs. (In addition to Social Security and Medicare, they are unemployment benefits, food stamps, Medicaid and Temporary Assistance for Needy Families, commonly referred to as “welfare.” Of the major programs, unemployment benefits and Social Security are the most used.)

The survey found that most Democrats (60%) and Republicans (52%) said they had benefited from a major entitlement program at some point in their lives. So had nearly equal shares of self-identifying conservatives (57%), liberals (53%) and moderates (53%).

In addition to the majority who said they had received benefits from at least one entitlement program, 32% had received help from two or more. Read more