Despite last year’s divisive presidential campaign focusing on such polarizing issues as economic class and immigration, a Pew Research Center survey conducted Nov. 28-Dec. 5, 2012 found that the American public perceived less conflict between groups at the center of these debates now than before the campaign began.

The survey found that 58% of adults say there are “very strong” or “strong” conflicts in our society between the rich and the poor, down from the 66% who said the same in a December 2011 survey. 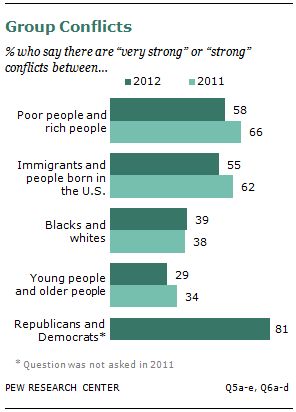 Similarly, 55% of adults said there were very strong or strong conflicts between immigrants and the native born, down from the 62% in late 2011.

At the same time, a larger share of the public saw major partisan conflict (81%) between Republicans and Democrats than saw similarly large disputes between rich and poor (58%), immigrants and native born (55%), blacks and whites (39%) or the old and the young (29%).

While more of the public sees Republicans and Democrats at loggerheads, it’s an area in which adherents of both parties find agreement. Equally large shares of Republicans and Democrats (83%) say there are strong conflicts between the two major political parties, while 80% of political independents agree. Virtually identical proportions of self-described conservatives (81%), liberals (83%) and moderates (83%) also see strong disagreements between the two major parties.

While voters were narrowly split between President Obama and Mitt Romney in November, they come together in their feelings about the partisan divide. Among Romney voters, 87% see a strong conflict, a sentiment mirrored by 86% of Obama voters. Those who sat out the election or voted for another candidate see a lower level of perceived conflict (73% say it is strong). Read more

Most across 19 countries see strong partisan conflicts in their society, especially in South Korea and the U.S.

A Majority of Americans See Conflict Between Rich and Poor