When it comes to legislative action that the public considers essential this year, dealing with the deficit far and away ranks at the top of the list; 70% say it is essential for the president and Congress to act on this in 2013. By comparison, other initiatives highlighted in President Obama’s inaugural and State of the Union addresses – major immigration legislation, gun legislation and new climate change policies – do not rank nearly as high.

Overall, the public remains divided over gun control in a February survey conducted about two months after the shootings in Newtown, Conn. Half (50%) say controlling gun ownership is the more important priority, while 46% say protecting the right of Americans to own guns is more important.

Just as Republicans and Democrats are divided over whether the priority should be controlling gun ownership or protecting gun rights, there is a partisan gap when it comes to the importance of passing major gun legislation.

Fully 71% of Democrats say it is essential for Congress and the president to act on gun legislation this year. About two-in-ten (18%) say it can be done in the next few years and just 9% say it should not be done at all. By contrast, a narrow majority of Republicans (53%) say no action should be taken at all on gun legislation. About two-in-ten (19%) say it is essential this year, while 24% would like to see gun legislation in the next few years. Read more 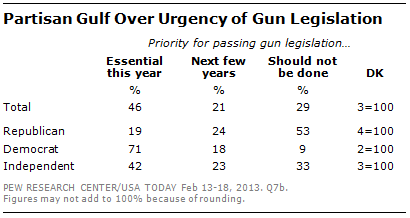 Among gun owners, NRA members have a unique set of views and experiences

Key takeaways on Americans’ views of guns and gun ownership

The public’s predictions on immigration, gun control bills this year