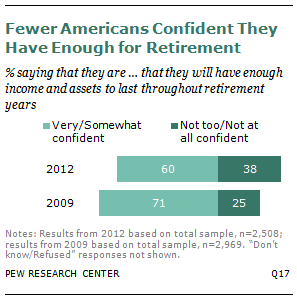 Despite a slowly improving economy and a multi-year stock market rebound, Americans are more worried about their retirement finances than they were at the end of the Great Recession in 2009.

About four-in-ten adults (38%) say they are “not too” or “not at all” confident that they will have enough income and assets for their retirement, according to a 2012 survey. That’s up 13 percentage points from the 25% who expressed that concern in a Pew Research survey in early 2009.

An analysis of these surveys also shows that concerns about retirement financing are now more heavily concentrated among younger and middle-aged adults than among those closer to retirement age — a major shift in the pattern that had prevailed at the end of the recession.

In 2009 it was “Gloomy Boomers” in their mid-50s who were the most worried that they would outlive their retirement nest eggs. In the more recent survey, retirement worries peak among adults in their late 30s – many of whom are the older sons and daughters of the Baby Boom generation.

The 2012 survey finds that among adults between the ages of 36 and 40, 53% say they are either “not too” or “not at all” confident that their income and assets will last through retirement. In contrast, only about a third (34%) of those ages 60 to 64 express similar concerns, as do a somewhat smaller share (27%) of those 18 to 22 years old. Read more

Adults in Mid- to Late-30s Worry Most about Retirement Finances
Amid the pandemic, a rising share of older U.S. adults are now retired
The pace of Boomer retirements has accelerated in the past year
More than half of U.S. households have some investment in the stock market
Empty Nest Eggs