Pope Benedict XVI, the spiritual leader of some 1 billion Catholics worldwide, announced on February 11 that he will retire from his post by the end of the month, citing weakness and age. It will make him the first pope to resign in 600 years. 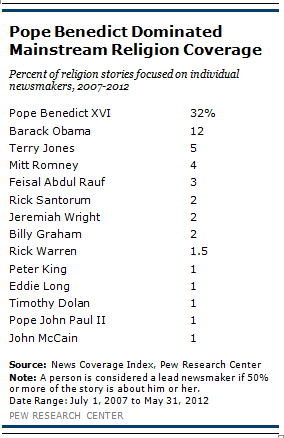 Perhaps the most visible religious figure in the world, Pope Benedict has attracted a significant share of news coverage over the years. Since Pew Research Center began tracking the U.S. news media in 2007, the pope has been by far the central figure in mainstream religion coverage.[i]

A new analysis of 2,700 religion stories in newspapers, websites, cable and broadcast news programs and audio outlets over a five-year period finds that:

Despite all the pope’s activities over the years, the U.S. media primarily focused on two main stories, with little attention to religious issues the Pope dealt with during his tenure. 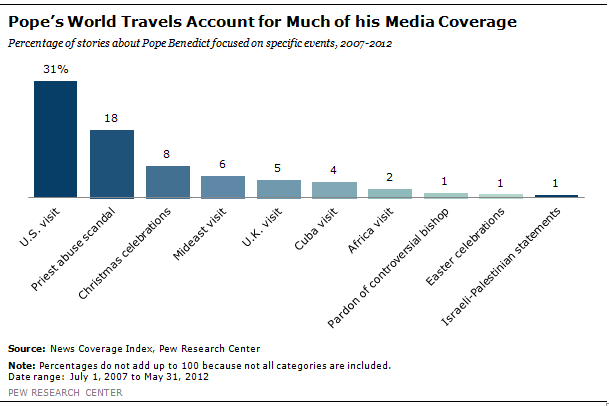 Resources on Catholicism and the Pope

[i] The data include all stories in which Pope Benedict was the main newsmaker—442 stories in all. The date range is July 1, 2007-May 31, 2012. The sample includes approximately 50 major news outlets in print, web, network TV, cable TV and audio platforms. The methodology can be found here.