The nomination of John Brennan to head the Central Intelligence Agency is expected to renew focus on the U.S. use of drones against suspected militants at his Senate confirmation hearing on February 7. A majority (62%) of the U.S. public approves of drone strikes, but outside of the United States, there is considerable opposition among most nations surveyed by the Pew Research Center. 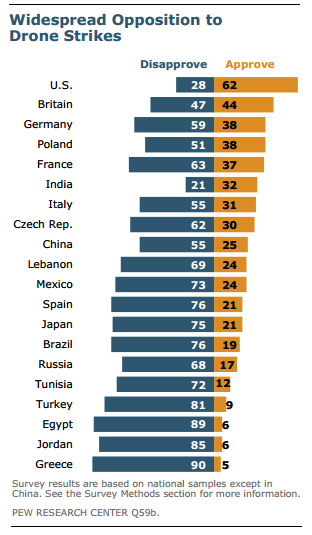 As President Obama’s counter-terrorism adviser, Brennan has been considered the architect of the administration’s strategy for use of drones.

Last spring, Pew Research surveyed the public in 20 countries around the world and found that in 17 of them, more than half disapproved of the U.S. conducting drone strikes to target extremists in places such as Pakistan, Yemen and Somalia. The policy was particularly unpopular in majority Muslim nations, but it also faced disapproval in Europe and other regions as well.

Americans largely supported the drone attacks in the spring survey: 62% approved compared to 28 % who disapproved. While support was especially high among Republicans (74%), most independents (60%) and Democrats (58%) also approved.

In Europe, there was a significant ideological gap on the question. A majority (56%) in Britain who described themselves as being on the political right favored the drone strikes, but just 31% on the left agreed. In France, 49% of those on the right approved of the strikes compared to 26% on the left. Double-digit differences were also found in Italy, the Czech Republican and Germany.

There were even larger gender differences on drone use throughout most of Europe, and also in the U.S. Japan, and Brazil. In the U.S., 74% of men supported the strikes compared to 51% of women. In all, ten of the nations surveyed had double-digit gender gaps on the issue.