Latinos disapprove by a margin of more than two-to-one of the way the Obama administration is handling deportations of unauthorized immigrants, according to a new national survey of Latino adults by the Pew Hispanic Center, a project of the Pew Research Center. The survey also reveals that heading into the 2012 presidential campaign, Obama and the Democratic Party continue to enjoy strong support from Latino registered voters, despite a decline in Obama’s job approval rating. 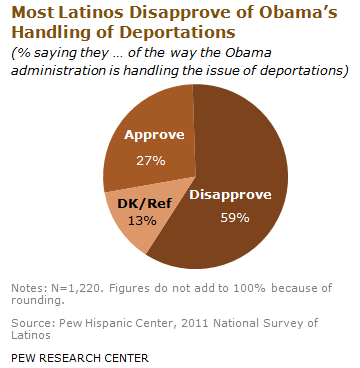 Read the full report for more information on these subjects: