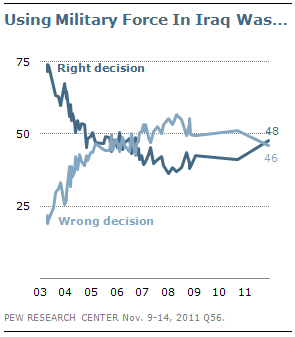 More than eight years after U.S. troops entered Iraq, the United States military – with the exception of a few troops connected with the U.S. Embassy – will leave the country by the end of 2011. The public is overwhelmingly supportive of this action, with fully 75% saying in a national poll conducted in November by the Pew Research Center for the People & the Press that they approve of President Barack Obama’s decision to withdraw all U.S. combat troops from Iraq by the end of the year. Nine-in-ten Democrats approve of that decision while Republicans are divided. Independents support the decision by more than four-to-one (79% to 18%).

Attitudes Toward the War in Iraq

In the most recent national poll, a majority of Americans (56%) say the United States has mostly succeeded in achieving its goals in Iraq. The original decision to use military force, by contrast, remains contentious.

Slideshow: Pew Research Center’s Paul Taylor on attitudes of veterans and the public

Video: A panel of veterans and military scholars discuss war and sacrifice in the post-9/11 era

While 48% say the United States made the right decision to use military force in Iraq, nearly as many (46%) disagree. And the issue continues to be politically divisive: 72% of Republicans support the decision to use force compared with just 44% of independents and 37% of Democrats.

Throughout much of the past decade, there has been substantial skepticism that the war in Iraq improved America’s security. In a national survey conducted just before the 10th anniversary of the Sept. 11 attacks, 31% of the public said U.S. involvement in Iraq increased the chances of another terrorist attack here, and 39% said it made no difference. Just 26% said the war in Iraq has lessened the chances of another attack.

At Home, a Military-Civilian Gap

Fully 96% of veterans who served on active duty in the post-9/11 era are proud of their service, according to a national survey of veterans conducted this year by the Pew Research Center’s Social & Demographic Trends project. At the same time, returning troops are facing more difficulties than are veterans from earlier eras. Among veterans of post 9-11 wars, 44% say they have had difficulty readjusting to civilian life, compared with 25% of pre-9/11 veterans.

U.S. troops are returning home from Iraq at a time when fewer Americans have a connection to the armed forces. More than nine-in-ten Americans express pride in the troops and three-quarters say they thanked someone in the military.

A smaller share of Americans currently serve in the armed forces than at any time since the peacetime era between World Wars I and II. At a Pew Research Center event in October examining war and sacrifice in the post-9/11 era, writer and military historian Rick Atkinson said the military “has become a separate tribe in the republic.”

More than eight-in-ten (84%) post-9/11 era veterans say that the American public has little or no understanding of the problems that those in the military face. The public shares in that assessment, albeit by a less lopsided majority (71%).

Public Awareness of the War in Iraq

The conflict in Iraq has faded in Americans’ minds and in news coverage. Coverage of Iraq comprised just 0.6% of newshole monitored from Jan. 1 through Dec. 4 in the ongoing News Coverage Index (NCI) conducted by the Pew Research Center’s Project for Excellence in Journalism. That’s down substantially from 2007, the first year that PEJ began its ongoing coding of the news. That year, Iraq accounted for 15.4% of the newshole, spurred by debates in Washington over Iraq policy and the beginning of the surge of U.S. troops in the country. 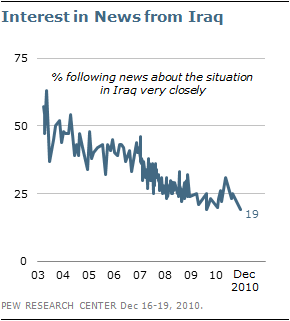 In recent years, Americans have paid closer attention to news about plans for U.S. troops in Iraq than conditions on the ground there. In December 2010, just 19% said they were very closely following news about the current situation and events in Iraq.

Obama’s announcement this October that troops would be withdrawn by the end of 2011 was very closely followed by 30% of Americans. It generated less interest than several other major policy announcements about Iraq. In March 2009, 40% said they very closely followed Obama’s announcement that he planned to withdraw most combat troops by August 2010. And in January 2007, as President George W. Bush laid out plans for a surge in troop levels in Iraq, 46% said they were following news about the war very closely.