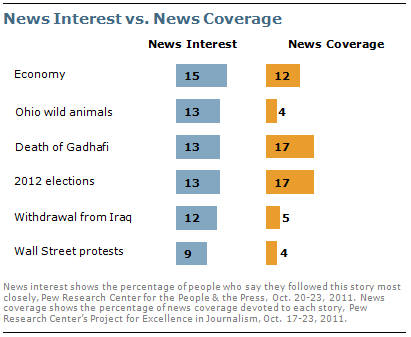 Americans divided their attention last week among several breaking news stories – from the death of Moammar Gadhafi in Libya to the release of dozens of dangerous wild animals in Ohio to the announced withdrawal of U.S. troops from Iraq– while still keeping a close watch on news about the nation’s economy.

No single story stands out in the most recent weekly News Interest Index survey, conducted Oct. 20-23, 2011, among 1,009 adults by the Pew Research Center for the People & the Press. While 15% say the condition of the economy was their top story, about as many cite Gadhafi’s death (13%), the release of wild animals in Ohio (13%) or news about the 2012 presidential candidates (13%) as the news they followed most closely.

Another 12% say their top story was President Obama’s announcement that he will withdraw all U.S. forces from Iraq by the end of 2011; 9% say they followed news about the anti-Wall Street protests in New York and other cities most closely.

Though it came late in the week, Gadhafi’s violent death topped news coverage, along with news about the 2012 presidential election. Each made up 17% of the newshole, according to a separate analysis by the Pew Research Center’s Project for Excellence in Journalism (PEJ). News about the economy in general accounted for 12% of coverage, not including 4% devoted specifically to the Occupy Wall Street protests. 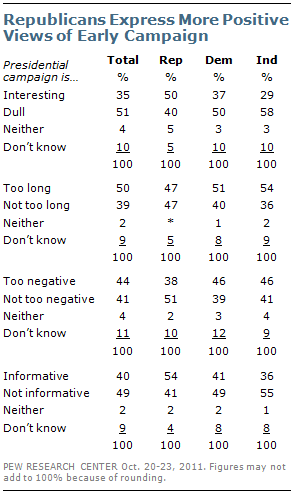 Nearly four-in-ten (38%) say they very closely followed reports about the condition of the U.S. economy last week. The level of interest has changed little in recent months as the economy continues to struggle and unemployment remains high. In total, news about the economy made up 16% of coverage, with 12% devoted to general economic conditions and 4% devoted primarily to the Occupy Wall Street protests.

Three-in-ten (30%) say they very closely followed President Obama’s announcement that the U.S. would withdraw all U.S. forces from Iraq by the end of 2011. Though Republican presidential candidates have hammered away at Obama’s decision, Democrats say they followed this news more closely than Republicans (38% vs. 26%). Three-in-ten independents say they followed this news very closely. News about Iraq and Obama’s announcement accounted for 5% of coverage, according to PEJ.

Americans in recent years have paid closer attention to news about plans for U.S. troops in Iraq than conditions on the ground there. Last December, just 19% said they were very closely 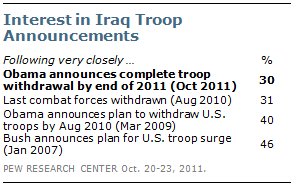 following news about the current situation and events in Iraq.

A quarter of the public (25%) says they followed news about Gadhafi’s death very closely. After what has been a tumultuous year in the Middle East and North Africa – and with Gadhafi already out of power – this news attracted relatively modest interest.
By comparison, 37% in early April said they very closely followed news about air strikes by the U.S. and allies in support of rebels fighting Gadhafi’s forces. Looking elsewhere in the region, roughly four-in-ten (39%) in February said they were very closely following the anti-government protests in Egypt and the resignation of that nation’s long-time ruler, Hosni Mubarak.

About a quarter (23%) say they very closely followed news about the release of lions, tigers and other animals from a private wild animal farm in Ohio. Police killed most of the animals, fearing they could hurt humans if not put down quickly. This news made up 4% of the coverage analyzed by PEJ.

Overall, 13% say this was their top story of the week. Nearly two-in-ten women (18%) say they followed this news more closely than any other story, putting it at the top of their list along with the economy (14% most closely). For men, this was a lower priority: 8% say this was the news they followed most closely, while 17% say the economy was their top story. 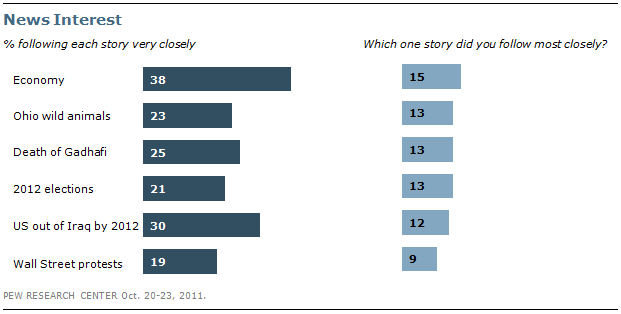 About two-in-ten (21%) say they very closely followed news last week about the candidates for the 2012 presidential elections. As has been the case in recent weeks, Republicans tracked this news more closely than Democrats or independents. Nearly four-in-ten Republicans (37%) say they followed campaign news very closely, compared with 20% of Democrats and 16% of independents.

About two-in-ten (19%) say they very closely followed news about the anti-Wall Street protests in New York and other cities. This was the top story for 9%. Comparable numbers of Democrats, Republicans and independents say they followed this news very closely (23%, 19% and 17%, respectively). Coverage dropped from 10% two weeks ago to 4% this past week.

These findings are based on the most recent installment of the weekly News Interest Index, an ongoing project of the Pew Research Center for the People & the Press. The index, building on the Center’s longstanding research into public attentiveness to major news stories, examines news interest as it relates to the news media’s coverage. The weekly survey is conducted in conjunction with The Project for Excellence in Journalism’s News Coverage Index, which monitors the news reported by major newspaper, television, radio and online news outlets on an ongoing basis. In the most recent week, data relating to news coverage were collected Oct. 17-23, and survey data measuring public interest in the top news stories of the week were collected Oct. 20-23 from a nationally representative sample of 1,009 adults.