The analysis in this report is based on a nationally representative online survey conducted by Pew Research Center from March 18 to April 1, 2020, among a sample of 3,143 adults 18 years of age or older residing in the United States. This included an oversample of 437 African Americans and 176 Hispanics. The survey was conducted by Ipsos in English and Spanish using KnowledgePanel, its nationally representative online research panel. 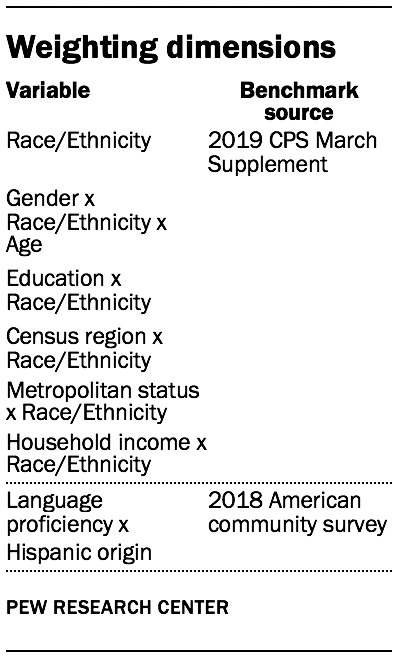 KnowledgePanel members are recruited through probability sampling methods and include both those with internet access and those who did not have internet access at the time of their recruitment. For the latter, KnowledgePanel pays for internet access and provides a device to access the internet when they join the panel. A combination of random-digit dialing (RDD) and address-based sampling (ABS) methodologies have been used to recruit panel members. In 2009, KnowledgePanel switched its sampling methodology for recruiting panel members from RDD to ABS. The panel includes households with landlines and cellular phones, including those only with cellphones and those without a phone. Both the RDD and ABS samples were provided by Marketing Systems Group.

KnowledgePanel continually recruits new members to offset attrition as people leave the panel. All active adult members of the Ipsos panel were eligible for inclusion in this study. In all, 5,799 panelists were invited to take part in the survey, for a study completion rate of 55.4%. All sampled members received an initial email to notify them of the survey and provide a link to the survey questionnaire. Additional follow-up reminders were sent as needed to those who had not yet responded.

The cumulative response rate accounting for nonresponse to the recruitment surveys and attrition is 3.7%. The break-off rate among panelists who logged onto the survey and completed at least one item is 5%.

The data were weighted in a multistep process that begins with a base weight incorporating the respondents’ original selection probability. The next step in the weighting uses an iterative technique that aligns the sample to population benchmarks on the dimensions listed in the accompanying table.

In addition to sampling error, question wording and practical difficulties in conducting surveys can introduce error or bias into the findings of opinion polls.